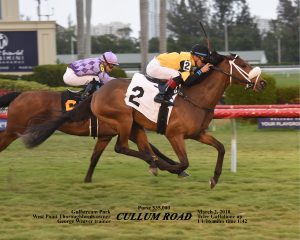 Cullum Road overcame being boxed in down the backside and bumped in the lane to break his maiden for trainer George Weaver and jockey Tyler Gaffalione at Gulfstream on Friday.

“He’s still a work in progress physically and will get stronger behind in the coming months,” says West Point president Terry Finley. “The rider on the outside horse made a premature move, and that really helped our chances — the leaders had to react sooner than they wanted. Cullum Road came back blowing hard but had a great look in his eye. I love that we can face winners in a starter allowance, that’s a big plus for a horse like this.”

The gelded son of Quality Road is named after one of the main roads at the United States Military Academy at West Point.

Beautiful chestnut Saints’ Girl made it two for two with a dominating allowance win on Saturday at Fair Grounds.

Dispatched as the heavy favorite in the field of Louisiana-bred sophomore fillies, the daughter of Overanalyze broke from the rail and found herself boxed under while under a firm hold down the backside. Jockey Florent Geroux bided his time before Saints’ Girl bulled her way between fillies in the stretch and drew away convincingly.

“We wanted to get a prep into our filly before the stake at the end of the month,” said West Point EVP Jeff Lifson. “The long race didn’t go so we had to play the cards we were dealt and cut back to one turn. Fortunately, Saints’ Girl’s class shined through. Dallas has done a great job training her — she’s known to overdo it in the mornings, so he only worked her two three-eighths between races.” 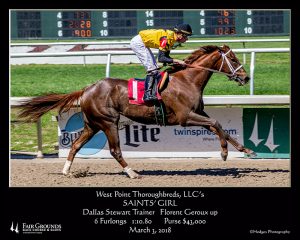