Steve Asmussen began training for West Point Thoroughbreds this winter, just in time for a key appointment a few months later when West Point landed a colt for $2-million at the OBS March sale of two-year-olds in training. It was the most money West Point had ever paid for a horse at public auction.

The colt, named Chestertown, is a son of leading sire Tapit and Asmussen has been intertwined with many of the best sons and daughters of Tapit, including Belmont Stakes winner Creator, the champion filly Untapable and the multiple Graded stakes winner and promising young sire Tapiture.

Chestertown displayed a high level of talent at the OBS sale and also had a reputation of being a handful on the track and back at the barn with his energy level and abundance of curiosity. Having Asmussen already on board the West Point team—and with his Hall of Fame credentials that feature the number-two position on the all-time wins list and legendary work with Curlin and Rachel Alexandra—West Point CEO Terry Finley was emboldened to assign Chestertown to Asmussen.

The striking gray colt spent a few weeks in Ocala to recover from the sales process before joining Asmussen’s division at Keeneland in early May. Within a few days, Asmussen and his team had observed Chestertown’s busy nature enough to move him close to the barn office to keep an eye on him.

“When he gets back to the barn after he trains, he wants to see everything that’s going on,” Asmussen said. “Like a lot of the Tapits, he is very intelligent and curious. Fortunately he also really enjoys and is aggressive about his job on the racetrack.”

For getting into the minds of sons and daughter of Tapit, Asmussen’s training toolbox contains a big advantage: his father, Keith, broke Tapit and provided the early training lessons for the eventual Grade 1 winner of the 2004 Wood Memorial Stakes.

Asmussen can recall conversations he had with his dad during Tapit’s time at the family’s El Primero Training Center in Laredo, Texas.

“At that point he wasn’t Tapit, he was ‘the Pulpit yearling,'” Steve Asmussen said. “I remember my dad saying ‘this colt remembers anything he does wrong.’ That is how the offspring are. If they get in a habit of doing something wrong, it is really hard to get them over it, they fixate on it, whether it is in the gate or something else.

“They do have an elite level of talent if you can get it right.”

Winchell Thoroughbreds campaigned Tapit and also has owned a number of his best progeny, most notably Untapable, who scored in the 2014 Kentucky Oaks and Breeders’ Cup Distaff. Just this last weekend, the Tapit colt Nitrous finished second by a neck in the Grade 1 Woody Stephens Stakes for Winchell and Asmussen.

“Steve knows the Tapits as well as anyone,” said David Fiske, the long-time racing and broodmare manager for the Winchell family’s operation. “Tapit himself and a lot of his offspring, if you observe them, you can call them quirky. I call them smart. They are really smart horses and get bored easily. Tapit himself when he was in Laredo they got to the point to where they had to tie him with his cheek up against the wall before training because they got tired of him taking off his tack and standing on it when the exercise rider would come in the stall.

“I remember when Tapit was with [trainer] Michael Dickinson, Tapit poked his head out into the aisleway and looked at me. The doors 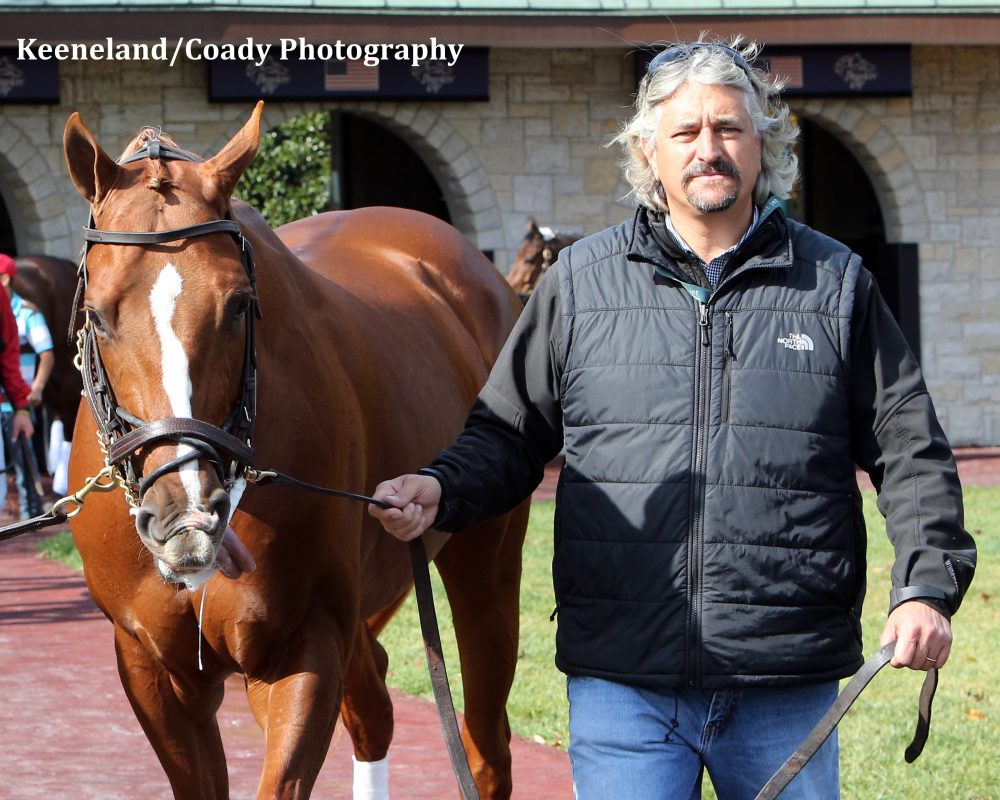 all have blanket bars on them and all his bandages were stuffed in the bar. He reached over and picked up one of the bandages, threw his head up and down, and then tossed the bandage at me. He watched the bandage unroll down the aisleway and tossed his head up and down and then looked out the window in the back of the stall, came back and did the same thing again. He did that with all four bandages, just to entertain himself.

“Tapizar [another Graded stakes winner by Tapit for the Winchells and Asmussen] would throw his Jolly Ball into the aisleway and if you threw it back in the stall, he would toss it back, and keep doing that all day long if you let him. There are a ton of anecdotes like that for Tapit and his offspring that I think are a picture of how smart they are.”

A picture of Asmussen and Tapit’s son Tapiture reflects the trainer’s dedication to “getting it right.”

At Oaklawn Park before the 2014 Arkansas Derby, Asmussen is shown wearing a blue number 3 paddock vest, almost always worn by a groom, leading Tapiture every step of the way, from the barn, to the saddling area, and onto the track, exhibiting the priorities of a proven horseman.