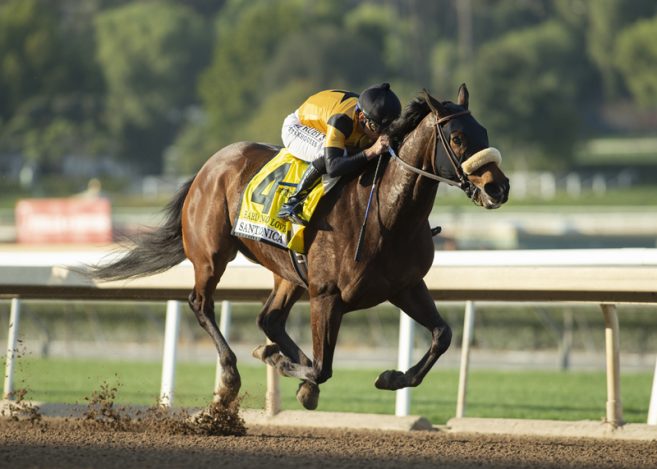 Hard Not to Love handled another challenge with ease on Saturday, cruising to victory in the Grade 2, $200,000 Santa Monica Stakes at Santa Anita.

The one-eyed filly improved to five wins in six career starts for trainer John Shirreffs. Like in the Grade 1 La Brea Stakes on December 28, she rumbled home from last in the Santa Monica for Hall of Fame jockey Mike Smith, surging through the stretch to win by 3 1/2 lengths and complete seven furlongs in 1:22.19.

“She got into a really good rhythm going past the three-quarter pole and that’s when I knew she was going to be very hard to beat,” Smith said. “I got to take my hat off to John and his team. She’s a lot of work. They’ve done a lot of work to get her here and now it’s paying off.”

Hard Not to Love to this point has only competed in one-turn races, but that could change on March 14 in Santa Anita’s Grade 1 Beholder Mile, to be contested around two turns.

Shirreffs said, “I think as long as she can (relax), with her style of running, it shouldn’t be a problem.”