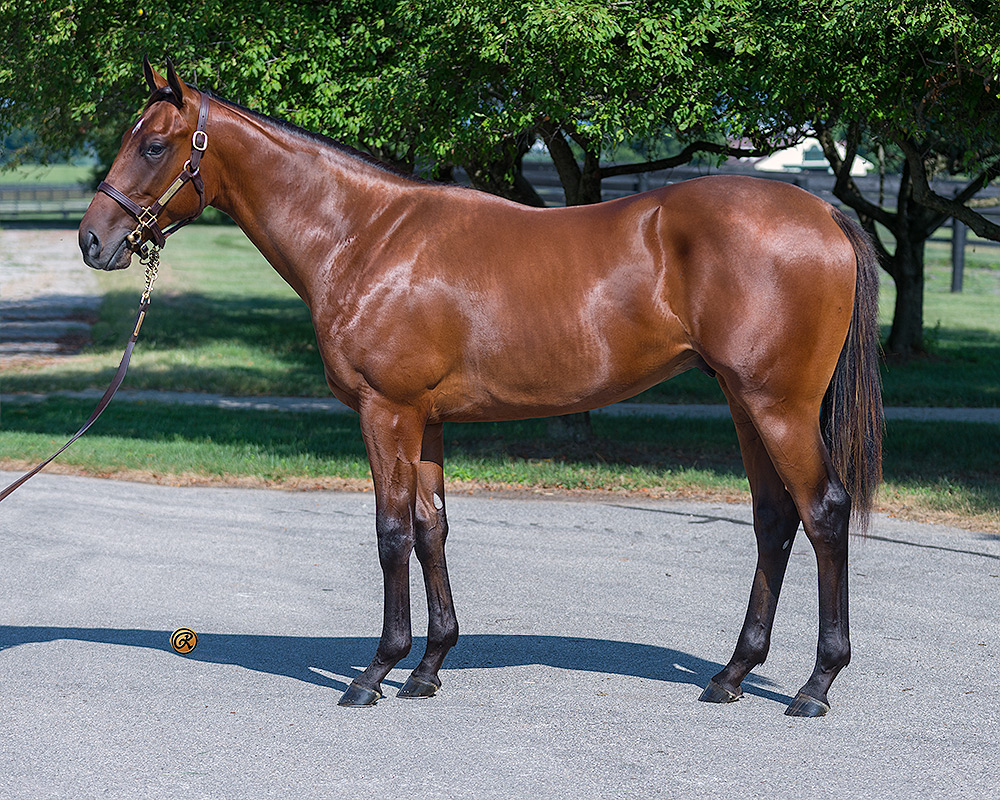 This story is an easy one to tell.

It's a twelve mile drive that'll take you seventeen minutes.

Maybe twenty if you're following a John Deere tractor or a Sallee Horse Van.

And if the fields alongside Paris Pike and Winchester Road could whisper...the names of champions and Derby Winners would filter in with a slow,steady ,mesmerizing tone, through your rolled-down car window.

It's the territory, the land, the grass, the limestone fed water and pure central Kentucky air that makes up the DNA code of the new chestnut colt in our possession.

From Gainesway Farm where his father resides to Claiborne Farm, where the mother's family roamed the hills and joined generations of champions raised and buried over the past century and a half, it's twelve miles.

Tapit is at Gainesway....the most sought after sire in this hemisphere for nearly a decade now. The sire of more than 25 G1 winners, sire of champions, sire of classic winners and sire of stallions that now deliver the racing goods with their progeny. Tapit is the father of our colt and these days....not much more needs to be uttered. It's the microphone drop of all microphone drops in the breeding and racing business these days to say your horse is a son or daughter of Tapit. Our new colt is.

Twelve miles down the road, just outside of Paris, on the banks of Kennedy Creek, framed by the centuries old stone walls of Winchester Road, stands Claiborne farm. Where Secretariat lies. And Buckpasser. And Gallant Fox. And Personal Ensign. And Swale. And Nasrulla. And Mr. Prospector. And Danzig. And Round Table. And that's not a complete list.

Also Finders Fee and Fantastic Find....two mares that make up the foundation of our new colt--their genetic magic through the decades adding layer upon layer to the colt who stood in the auction ring Monday night. They are two mares who represent the very best that the farm on the banks of Kennedy Creek can produce.

So the imposing physical, the regal way he walks, comes with a genetic code that is equally royal. Tapit...by Pulpit, who was conceived at Claiborne Farm, out of a mare from the Claiborne farm and Phipps racing stable family that few places could hope to reproduce.

He is without a doubt, the best that 2019 can offer in a prospective racehorse...looks, pedigree, potential stallion value.

And he's the best that generations of farmers in central Kentucky can claim...dominance, legacy....magic seared into the mile markers of a 17 minute drive.

The colt’s dam, Feathered, was a Grade 1 juvenile on dirt (runner-up in the Starlet Stakes at Los Alamitos) and Grade 1 three-year-old on turf when she finished second in the American Oaks at Santa Anita.

Trained by Todd Pletcher, the daughter of Indian Charlie was a much-coveted broodmare prospect ($2.35-million) based on her record, her looks and the strength of that female family, featuring Phipps stalwarts Finder’s Fee and Fantastic Find who were not only Grade 1 winners but also bred in the purple as exhibited by their sires, Storm Cat, and Mr. Prospector, respectively.

The new colt’s heart score is exceptional, rated an “A,” indicative of a superb cardio capacity.

The trainer will be John Sadler, who already has five stakes victories including a pair of Grade 1s at Del Mar this summer and is coming off a career season when he guided Accelerate to champion honors and a victory in the Breeders’ Cup Classic. 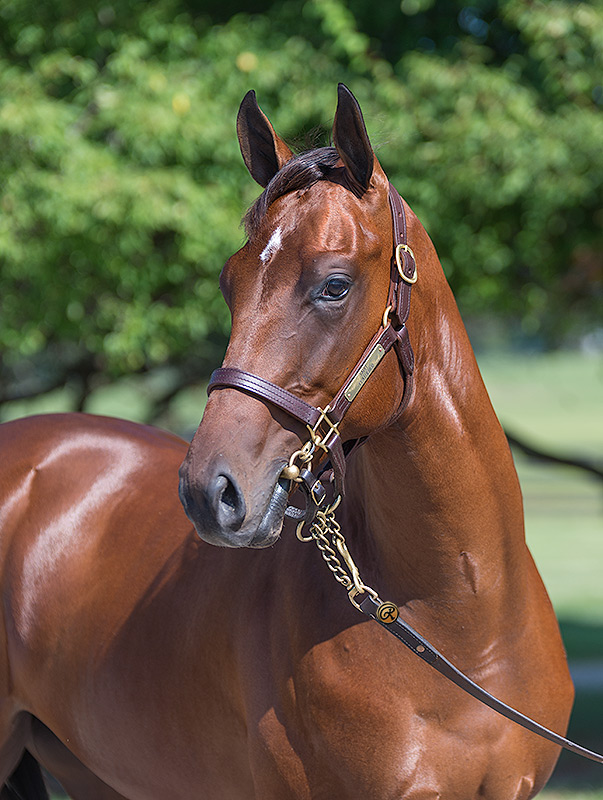 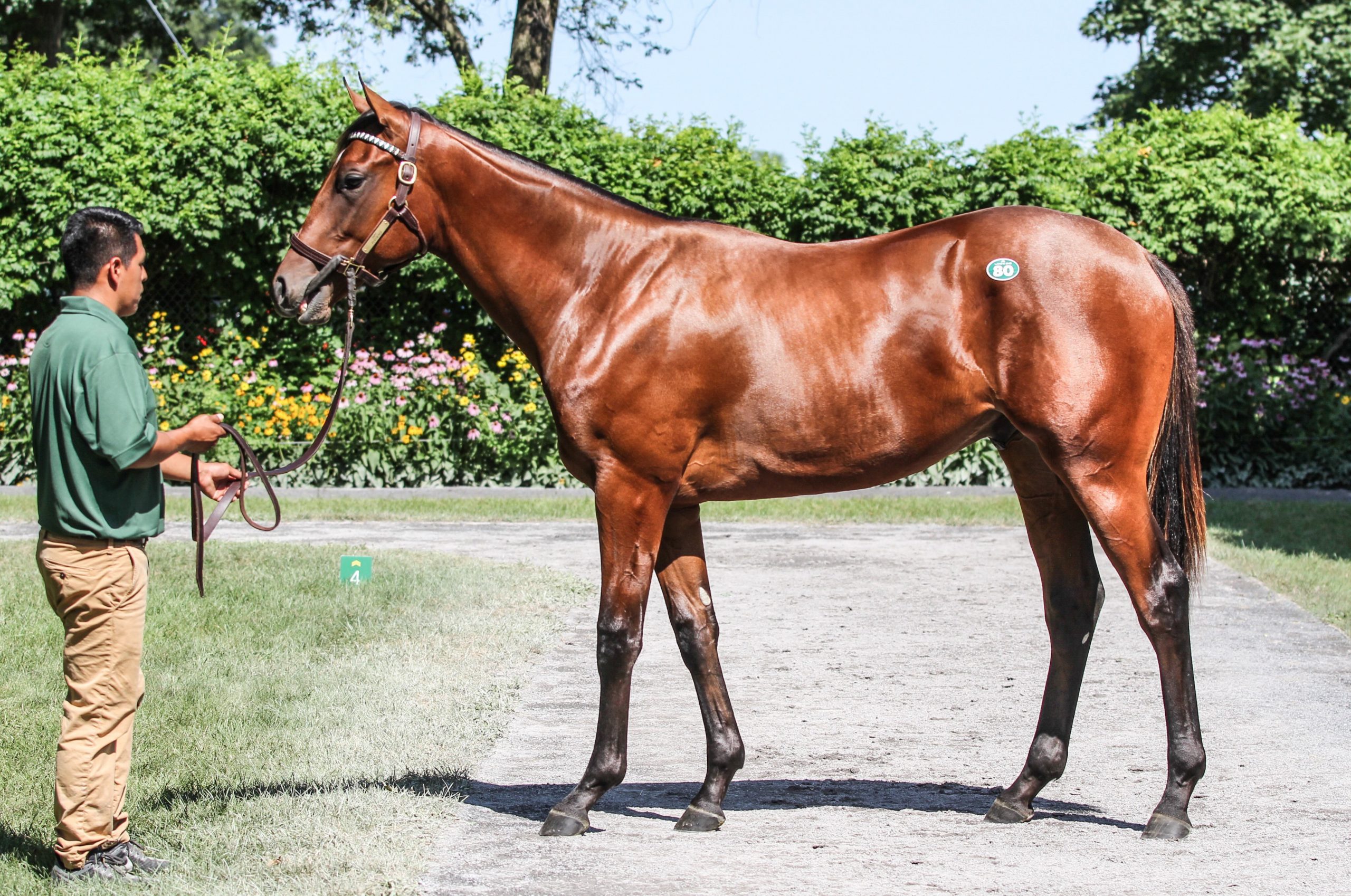 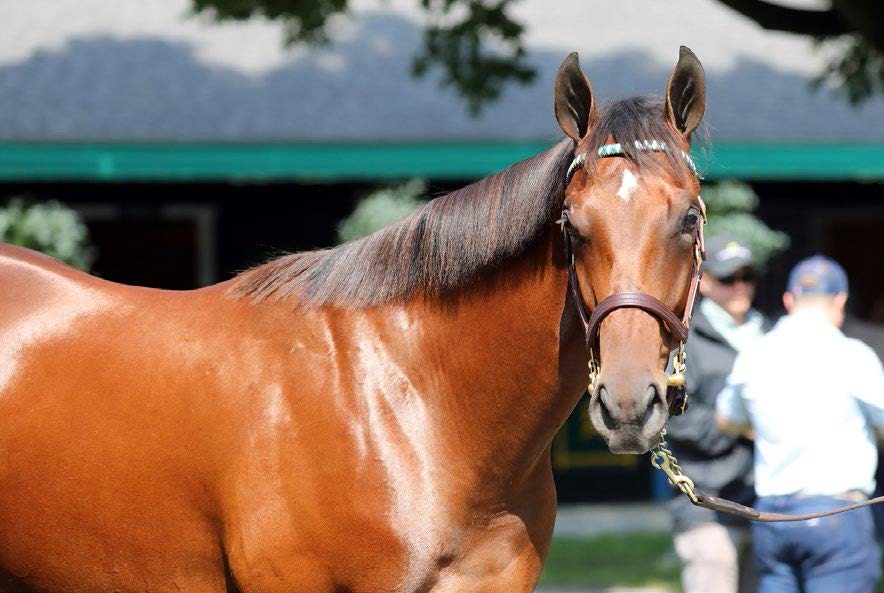 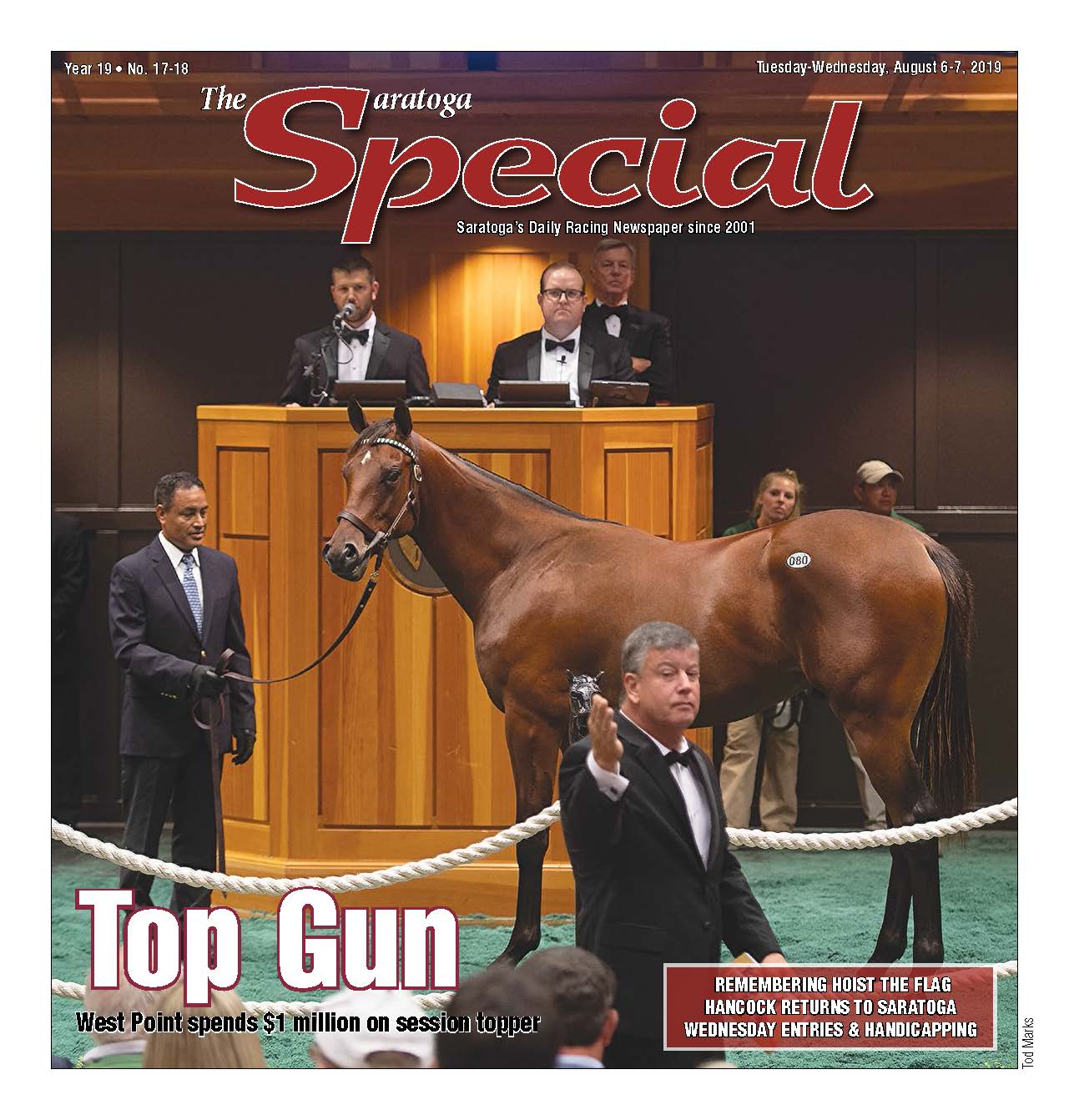 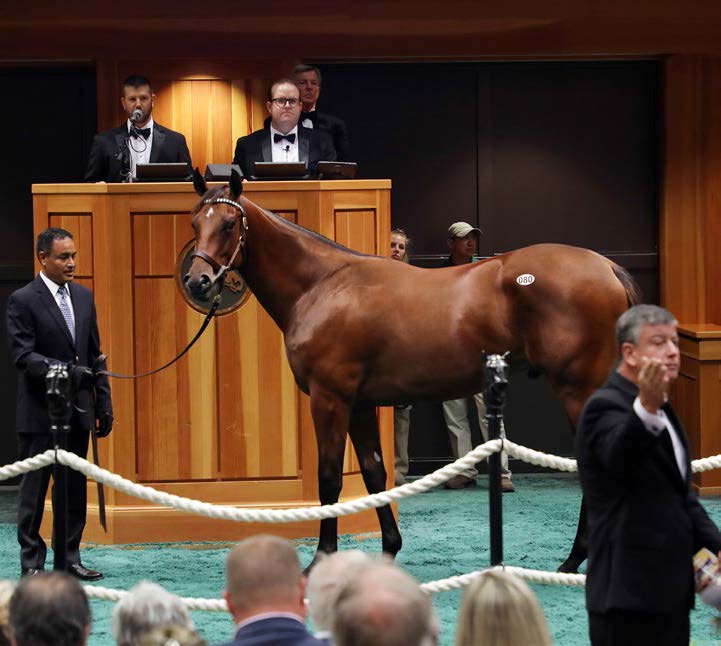 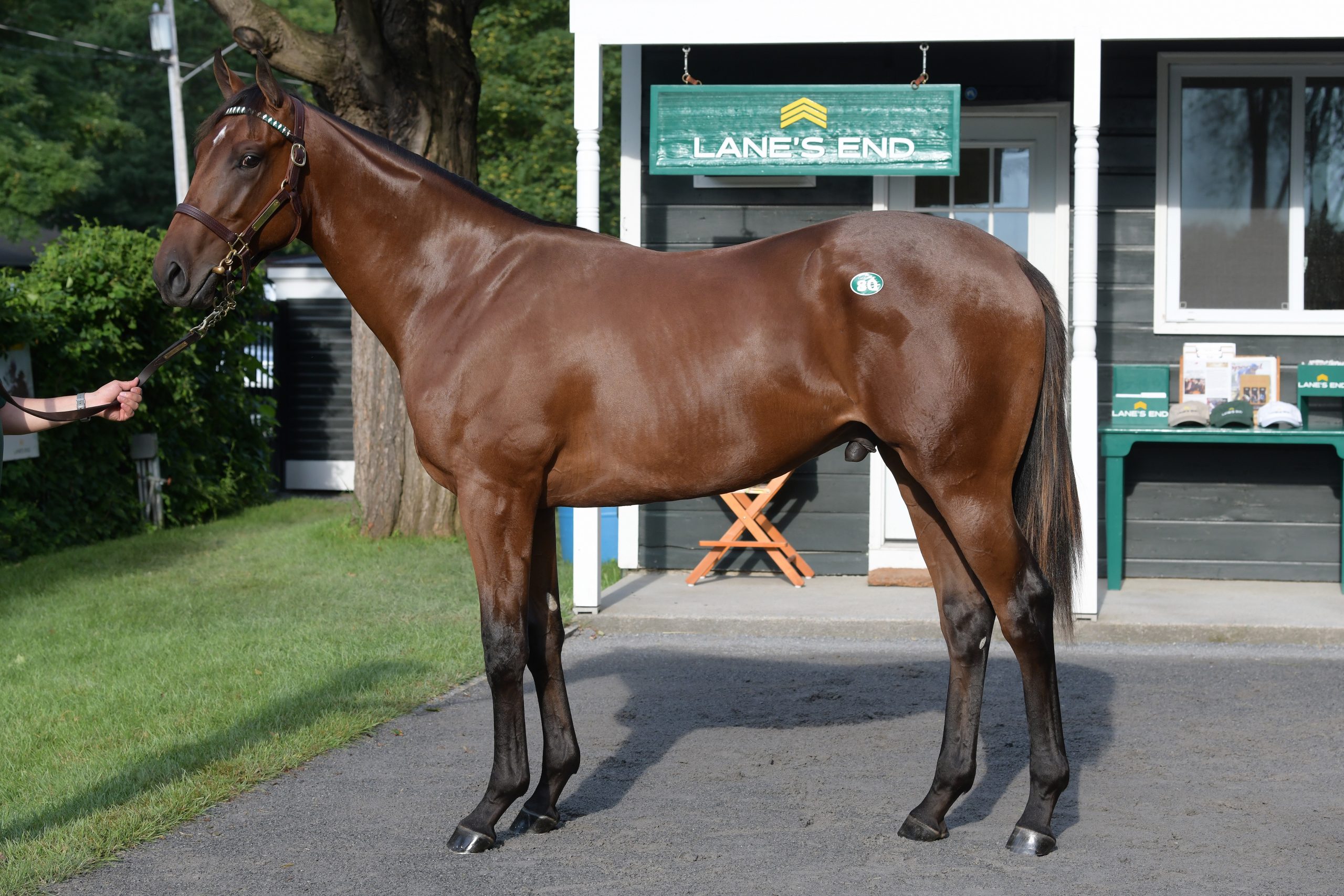