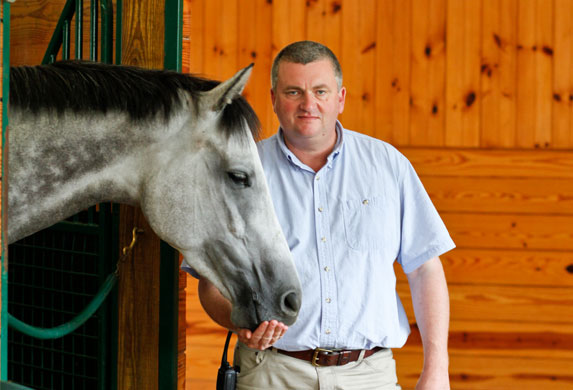 With the focus of the horse racing world shifting to Maryland for Saturday’s Preakness Stakes, the occasion is a good opportunity to shine a spotlight on the Fair Hill Equine Therapy Center operated by Bruce Jackson about an hour up the road from Baltimore in Elkton, Maryland.

Pairing skilled horsemanship with an array of treatment modalities, the facility on the Fair Hill Training Center property has been an important part of the equation for West Point Thoroughbreds in recent years for strengthening and speeding along a horse’s recovery from an injury or time off.

Jackson’s expertise as a trainer is a key component. He grew up on a sport horse farm in England, found his way to America to work under Hall of Fame trainer Jonathan Sheppard in Pennsylvania, honed a diverse skill set with stints in California, England and Australia, and eventually opened up his own stable in the Mid-Atlantic. He trained a number of stakes winners but settled into a role of providing support for trainers like Graham Motion and Mike Trombetta at Fair Hill and eventually various outfits based in New York, including Hall of Famers Bill Mott and Shug McGaughey.

Mott has trusted Jackson and his wife and assistant, Amy, enough to leave certain fillies with them at Fair Hill in between races if they fare better there than at a busy racetrack. McGaughey sent Kentucky Derby winner Orb to Jackson in 2013 for a working vacation in between the Belmont Stakes and Travers Stakes, utilizing the chance to freshen the colt up with pasture time and also let him benefit from what the Equine Therapy Unit has to offer. During a respite and as he geared back up for the races, Orb received sessions in a hyperbaric oxygen chamber and in a cold saltwater spa.

Another Kentucky Derby winner, Animal Kingdom, spent time with Jackson during two different injury rehabilitations with an emphasis on the therapy unit’s Aquapacer machine, an underwater treadmill that provides low-impact exercise for a horse who is resuming a conditioning regimen or is supplementing what he or she does on the training track.

Besides the two Kentucky Derby heroes, 59 other Grade 1 winners have spent time in the care of Jackson at the Fair Hill Equine Therapy Center.

West Point horses have benefited from the facility’s range of options, including a handful of horses currently on the way back from winter breaks or in the midst of injury rehabilitation.

Untamed Domain, a West Point Graded stakes winner and Breeders’ Cup Juvenile Turf runner-up, has been with Jackson this spring in the early stages of preparation for his 4-year-old season. He is to the point now where he is galloping on the racetrack and nearly ready for a formal workout, and he gets in additional exercise on the underwater treadmill as well as therapy sessions in the cold saltwater spa and on a vibration plate.

Jackson explained the benefits of all three, starting with the underwater treadmill, also known by the brand names Aquapacer or Aquatred.

“It is a high-resistance, low-impact workout,” he said. “They are getting a full-body workout without stressing the limbs too much. That is beneficial in numerous scenarios, like a horse with a bruised foot or a slightly tender splint or shin where it’s not bad enough that you have to stop and take the horse out of training, but it is affecting how much serious training you can get into the horse. Putting them in the Aquatred, you are able to maintain their fitness and at the same time take pressure off whatever might be bugging them and let that heal on its own, or we have other tools at our disposal to try to help them.

“The Aquatred also is very good for a heavy horse trying to get fit again, and when they are capable of doing it, like with Untamed Domain, we can do the Aquatred and let them train on the track in the same day and that just helps get the weight off them and get muscle-bound quicker for them to get to a point where they are doing some serious training and breezing. For a horse coming back from arthroscopic surgery, they can start back on the Aquatred in a matter of weeks. It is not a full workout, per se, but at a fairly low level of water depth, maybe mid cannon bone, they tend to step out and over the water and you’re able to give them a little physiotherapy, some range of motion and flexibility back into a joint that might have scar tissue after surgery.”

While the underwater treadmill mostly provides conditioning, the cold saltwater spa is a therapy tool, especially for enhancing circulation. With the horse led into the spa, water is allowed to rise to a level above the knees and hocks but below the belly, at a temperature 15 degrees colder than water and ice and a bucket, and acts as a poultice for the legs with the circulating cold water and sea and Epsom salts. Afterward, as the legs warm, a dilation effect occurs where the horse receives a rush of blood and oxygen to the lower limbs.

Vibrating plates are another therapy tool for circulation, where the horse stands on a vibrating platform.

“There have been a lot of studies done take scans that show different colors for the amount of blood flow before and after treatment on a vibration plate, and it’s quite dramatic the increase in circulation,” Jackson said. “It really helps the healing process, since horses traditionally have poor circulation in the lower limbs.”

A dry salt vapor room is a recent addition to the complex, one that Jackson said is reaping benefits.

“It is a room slightly bigger than a stall, so you can fit two horses in there, and there is a machine that provides pharmaceutical-grade salt into that atmosphere and the horse is standing there breathing those particles in,” he said. “It is monitored in real time for particle size and concentration to get the optimum treatment. Salt is a natural anti-inflammatory, a natural anti-fungal/anti-bacterial, so it will really soothe the respiratory system.

“If you are reducing inflammation within the respiratory system, you are making it more effective. We stable horses in an environment they are really not designed to be in, in a stall, being exposed to dust and pollen, and so their respiratory systems can get compromised. If you have an inflamed respiratory system, you are not getting that oxygen transfer across and obviously that is very important with a performance animal. So we have found it be very useful for horses that are prone to getting a little mucous, prone to allergies, horses that bleed, and for two-year-olds with their immune systems, when they get coughs and runny noses, typically we would treat them with antibiotics and this and that, and now our first approach would be to try the alt room for a week so we don’t have to go on antibiotics. It seems to help and you’re letting their natural immune system build up.”

The unit’s hyperbaric oxygen chamber also can be a great aid for a horse’s respiratory system in the recovery from a bleeding incident (exercise induced pulmonary hemorrhage) and is also used for open wounds or sores, to expedite healing by delivering 100 percent oxygen in the pressurized chamber. 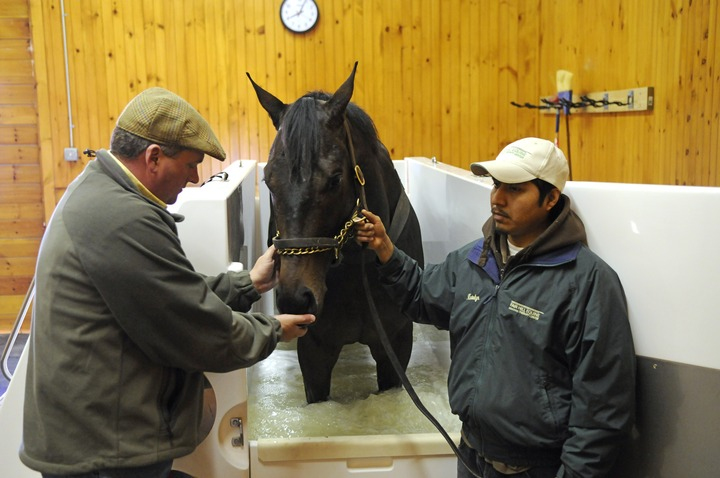 Bruce Jackson with a horse in the cold saltwater spa at Fair Hill. 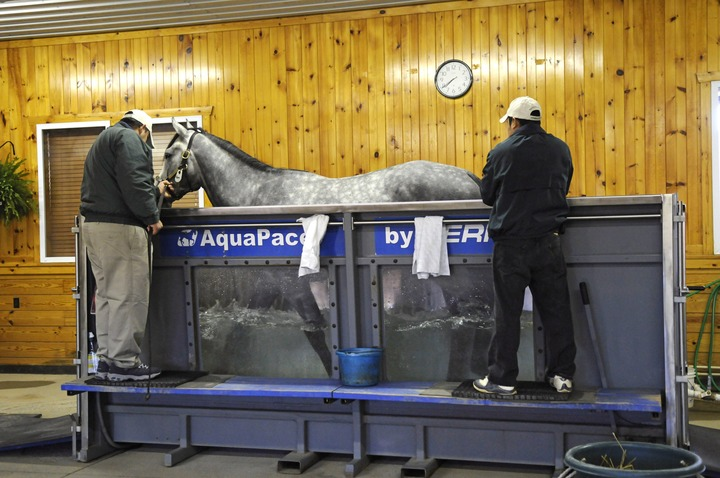