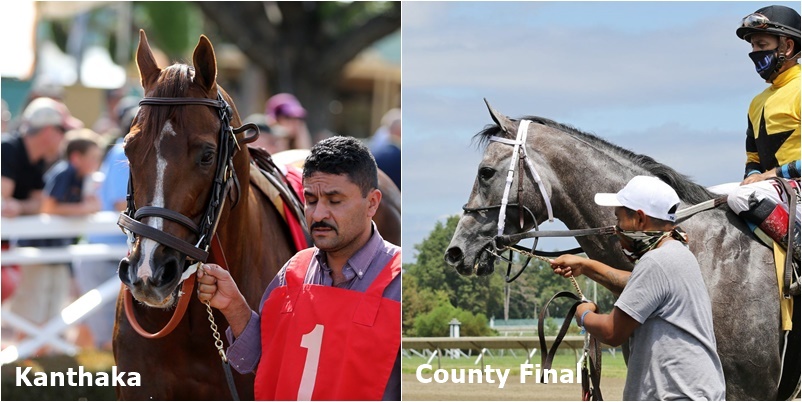 Kanthaka and County Final both have rich stakes opportunities at Kentucky Downs on Saturday that could pave their way to the Breeders’ Cup.

Kanthaka will line up in the $700,000 Runhappy Turf Sprint (G3T) about an hour after County Final goes forward in the $500,000 Juvenile Turf Sprint for 2-year-olds.

Jose Ortiz, the defending leading rider at the boutique meet outside Bowling Green, Kentucky, will take the reins on both horses.

Kanthaka and Ortiz teamed for the first time in the Grade 1 Jaipur Stakes on June 20 at Belmont. That was Kanthaka’s first start in more than a year and he came out firing for new trainer Graham Motion, finishing second by a neck at 16-to-1 odds. Kanthaka previously was a two-time Graded stakes winner on the dirt in Southern California. He is 5-to-1 on the morning line for the Turf Sprint, which offers a “Win and You’re In” ticket to the Breeders’ Cup Turf Sprint in November at Keeneland.

County Final has shown similar versatility in the course of just three starts. He began his career with a turf win at Churchill Downs, followed with a second-place finish on the Churchill dirt in the Grade 3 Bashford Manor Stakes, and after topping the Fasig-Tipton July horses of racing age sale and joining trainer Steve Asmussen, powered away to a 4-length victory in the Tyro Stakes on the main track at Monmouth Park.