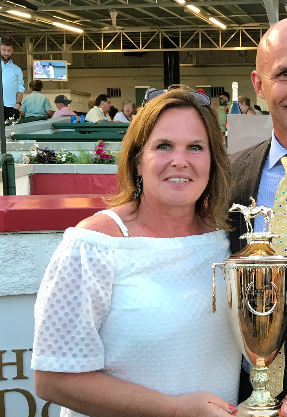 Terry and I met in high school and a lot of our dates started out with a trip to the racetrack, whether it be Philadelphia Park, Garden State or Liberty Bell. We both had a passion for horse racing early on.

We got married after Terry’s graduation from West Point and lived in Schweinfurt, Germany, but never had a chance to attend the races there. Terry traveled quite a bit and I would load my daughter Erin into the car and we would drive down the autobahn all over the country visiting different cities. It was wonderful to see Erin speaking German at an early age when Terry and I seemed to struggle with it a bit.

Needless to say, we missed horse racing very much! We said, “As soon we get back to the states, we want to purchase a racehorse!” And that we did – our first horse was Sun Belt who resided at Philadelphia Park and was trained by David Stubley.

Terry was traveling during Sun Belt’s first start under our colors in a $5,000 claiming race. I went to the track with my 3-year-old daughter and with another child on the way to give Terry the “play by play” on the phone – and was shocked to see our first horse win first time out in our colors.

As the ownership experience went on we realized we were not going to win them all! So, a few friends and ourselves bought some horses together. Terry and I never intended to start a partnership. He was fresh out of the military and working in the insurance business. But the concept continued to grow and more and more people wanted to be involved in the partnership with us leading it.

After a few years and some pushing from several of our associates, they convinced us to give this a whirl… and that we did! We worked out of the house the first year, then moved to a small office in the basement of an office building followed by a move to an office in Mt. Laurel, NJ. Fast forward 23 years and we’ve relocated our main office and moved our primary residence to Saratoga Springs, NY.

Hobbies: Gardening, cooking, crossword puzzles, and reading. We have a black lab mix named “Maggie” who I adopted from a shelter when she was five-years-old. I love Sundays – church, breakfast, sports, movies, family dinner and 60 Minutes!

Greatest Accomplishments: Raising two kids: Erin, who is a graduate of the University of KY, currently works with WPT, and is also an avid equestrian, and Ryan, who played professional soccer player and is now working in New York City. Also, starting the West Point initiative for Breast Cancer Awareness with our first filly Flashy In Pink. Served as Co-Chair and Honorary Chair for three years on NYRA’s Fabulous Fillies initiative, helping raise over $300,000 for breast cancer research.

Most enjoyable part of owning WPT: The people, the horses, and the team.

Someone I admire: Congie DeVito who was West Point’s first communications director and never let his own personal challenges stop him from achieving his dreams and goals. He was such an inspiration to all of us. He died at age 35 from complications for a lifelong medical condition, Osteogenesis Imperfecta, more commonly known as brittle bone disease. I miss his friendship every day…