West Point’s first Breeders’ Cup was in 2003. It’s kinda like your first kiss, first horse, or first car — you always remember them.

We had a horse named Ethan Man, and man, was he a gorgeous animal. He became our first graded stakes winner when he won the 2002 Swale Stakes at Gulfstream with Pat Day aboard.

We finished second in the Phoenix at Keeneland that fall, which stamped his ticket to California for the Breeders’ Cup. I remember being in the paddock that beautiful afternoon at Santa Anita like it was yesterday. There was so much anticipation and excitement as Rene Douglas climbed aboard.

He didn’t run well — in fact, Ethan Man was vanned off after the race and was ultimately retired. But, I’ll never forget the magic of being in the paddock with a Breeders’ Cup starter for the first time.

I didn’t see Rene for several years after the Breeders’ Cup. Unfortunately, he was paralyzed from the waist down following a spill at Arlington in 2009.

I know he’s had some tough years, but the last few have been great. He’s alert, articulate and very funny.  Dale Romans, Rene, “the boys”, and I often met almost every morning this year on the Gulfstream Park apron to “chew the fat” and bust each other’s chops. And tell the same stories over and over again. Dale Romans has a habit of doing that! 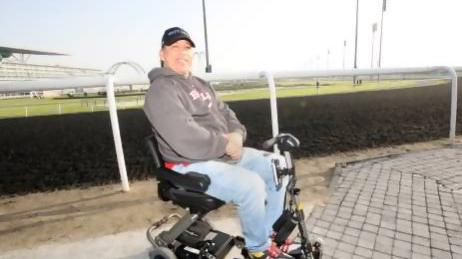 The Breeders’ Cup means so much to us as owners, but think about the (not in any particular order) jocks, trainers, and agents, racing managers, grooms, hot walkers, exercise riders, track, staff, breeders vets, blacksmiths, insurance agents, van personnel, and stall managers, security staff, etc. who are all involved in making it happen.

The list goes on and on. You get my point.

Next week memories will be seared into our minds. More than anything else, I hope for safe runs for all horses and riders. Both of our colts returning to the barn safe and sound is the most important thing. Winning? Well, that would be icing on the cake.