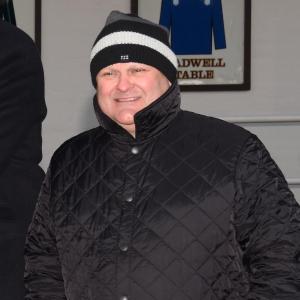 Danny Gargan is a racetrack “lifer” who grew up in the neighborhood around Churchill Downs in Louisville and followed his late father, also named Danny, into the racing business. The elder Gargan was a successful jockey, winning the 1973 Kentucky Oaks.

The younger Gargan was only 4 years old when his father died but he gravitated to the backstretch himself, mentored by trainers Mark Hennig and Merrill Scherer and assuming an assistant trainer role at age 21 with Hall of Famer Nick Zito.

Gargan eventually worked as a jockey agent for the likes of Jesus Castanon, Brian Hernandez Jr. and Patrick Valenzuela before deciding in 2013, at the urging of P. J. Campo, to open his own stable in New York, where Campo at the time was NYRA’s director of racing. With that, Gargan has carved out a budding training career. Within a year, he won a Grade 2 race at Saratoga and really hit his stride in 2017 and ’18, topping 50 wins both seasons and developing a high-class duo.

Divine Miss Gray, a former $16,000 claimer, capped a meteoric 2018 by capturing Churchill’s Grade 2 Chilukki Stakes, her fifth Black-Type triumph of the season. Around the same time last fall, Gargan flew back home to Kentucky with the sole intention of claiming a Claiborne Farm homebred named Tax, who had impressed Gargan in his career debut. Gargan succeeded in snagging Tax for $50,000 and five weeks later the juvenile gelding finished third in the Grade 2 Remsen Stakes at Aqueduct. In February 2019, Tax followed with a Grade 3 victory in the Withers Stakes. He wound up in the Kentucky Derby, bringing Gargan back to Louisville to compete in the Run for the Roses, and went on to win the $600,000, Grade 2 Jim Dandy Stakes that summer at Saratoga.