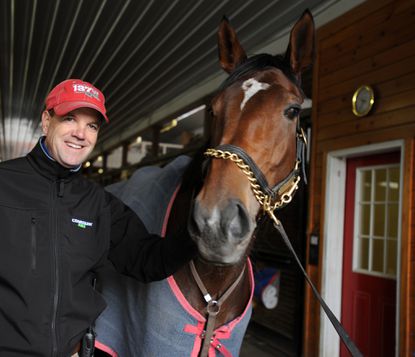 H. Graham Motion was born in Cambridge, England in May 1964 and was raised at Newmarket’s Herringswell Manor Stud operated by his parents Michael and Jo.

Michael was an international bloodstock agent and North American representative for Tattersalls, the British bloodstock sales company. Jo rode as an amateur in England and took care of the 1951 (Aintree) Grand National winner Nickel Coin before becoming an assistant trainer in the U.S. Jo now owns a successful tack shop in Middleburg, VA.

The family moved to the U.S. in 1980 and Graham completed high school and graduated from Kent in Connecticut.

Graham’s career began with six years working for Hall of Fame trainer Jonathan Sheppard at which time he travelled extensively with three time Eclipse Award winning steeplechaser Flatterer. This was followed by time with trainer Jonathan Pease in Chantilly, France.

While in Chantilly Graham met his wife, Anita who was working at the time for Alain De Royer-Dupre.

Returning to the U.S. in 1990 Graham went to work as assistant to Bernard (Bernie) P. Bond. On Bernie’s death in 1993 two owners left their horses with Graham who took out his license at that time; The stable won 21 races, three of them stakes, in that first year.

The Motion stable has evolved to one of the top in the country, with Breeders’ Cup wins, a Kentucky Derby win, and a Dubai World Cup win to their credit.

Graham and Anita live in Fair Hill, MD with their two children, Jane and Chappy.