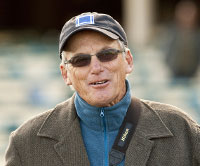 John Shirreffs is a Vietnam War veteran who has been training horses for nearly 40 years. He won the 2005 Kentucky Derby (G1) with Giacomo and is best known as the trainer of champion Zenyatta.

Born in Kansas, John grew up splitting time in New York and New Hampshire. He spent time on his family’s farm before serving in the Marine Corps and eventually working as an assistant to Brian Mayberry and Bill Spawr.

Hard Not To Love wins the La Brea Stakes (G1)