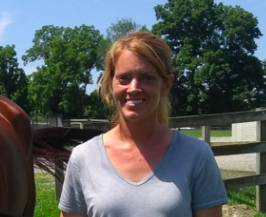 She attended State University of New York at Oswego and graduated with bachelor’s degrees in biology and chemistry and later earned Master’s degrees in secondary education and administration.

Rubley went on to teach middle school science for seven years before serving as a school administrator. Bitten with the horse bug as a youngster, she decided to leave education and move to the Fair Hill area to pursue a life with Thoroughbreds.

She became an exercise rider for Barclay Tagg in 2009 and eventually served as his traveling assistant. After then serving as an assistant for Jimmy Toner at Fair Hill, she went out on her own in 2014.