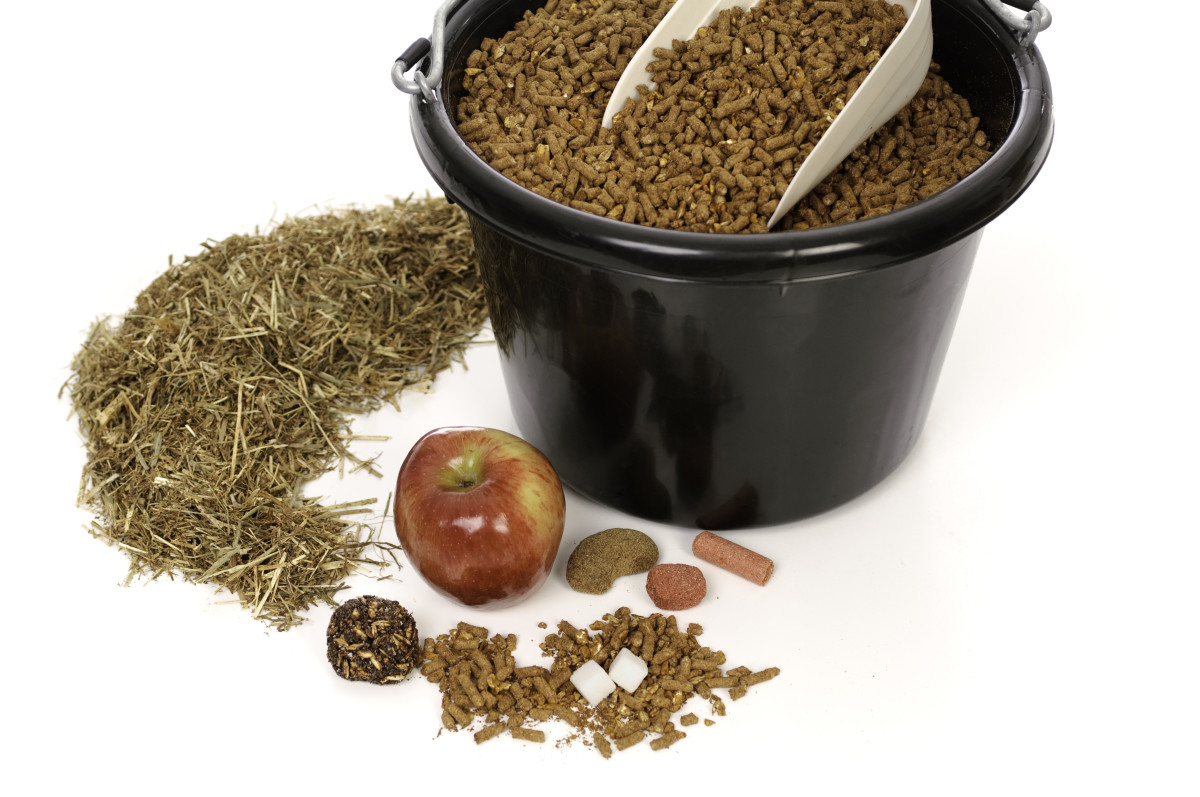 Feeding a racehorse : It’s all about energy. These are athletes in high-level training. The goal is to get them to an ideal body condition for training and racing while giving them enough fuel for them to perform in the morning and in the afternoon.

Like an Olympic athlete, say a Michael Phelps who famously required 12,000 calories a day at the peak of his training regimen, racehorses need a lot of fuel–around 35,000 calories a day, which is roughly twice as much as a regular horse in a pasture.

The typical diet comes in two or three meals a day. In America, that mostly means grain. The traditional grain for horses is oats, but a lot of trainers today use commercial products that are specifically formulated for racehorses and mix in non-saturated fats and fermentable fiber.

Racehorses eat oats from our northern states and Canada, blended commercially and sold by a local supplier, also known as the feed man. A daily ration of 12 to 14 quarts a day is typical, and a few horses here and there will need as much as 16 quarts a day.

Most barns will have a night watchman feed the horses early in the morning (3 or 4 a.m.) so that they will have time to eat before training begins. Usually they will have another meal around 10 or 11 a.m., and then a larger meal around 4 or 5 p.m. The late afternoon meal often is cooked in a mash and contains any supplements that are added to the diet.

Supplements come in because trainers have to worry more about their horses not eating enough, rather than too much.

Racehorses also receive hay that they can consume at their choice 24 hours a day, often in a hay net hung next to the stall. Most hay at the racetrack is timothy, which is grown in the Northwest. Often a flake or two of good quality alfalfa hay is also added daily to the hay net. Having this hay constantly available to eat at will is very important because the horse’s digestive tract is designed for grazing many hours per day.

Around the world, racehorses are fed dramatically different diets depending on the feeds available. Fresh cut green alfalfa is common in Argentina. In Australia, they use minimal grain but a lot of wheat and oat chaff. In Saudi Arabia, fresh cilantro, carrots, and a big tub of barley is the standard diet.

Now what about treats?

Since getting enough nutrition and energy is so vital, trainers will try just about anything to encourage a horse to eat.

Guinness beer is the drink of choice for many racehorses in Europe and occasionally some here in the U.S.: a frothy Guinness stout will be added on top of the usual feed. Zenyatta famously received a Guinness everyday, often from trainer John Shirreffs himself, and of course John has a number of West Point fillies in his barn today.

Some trainers will add perks like sweet potatoes or even raw eggs: the great sire Tapit received three eggs every day during his racing career, along with a Guinness. Dale Romans has also experimented with using chia seeds in his feed. You will see many trainers put some carrots in their horses’ feedtub to encourage them to chow down.

In the mid-1980s, Groovy was a champion sprinter even though he had an acute fondness for baked goods. He even had a favorite: donuts with raspberry filling. He would whinny and nicker whenever a coffee wagon pulled up to the barn. When he went to stud at what is now WinStar Farm, the donuts went with him.