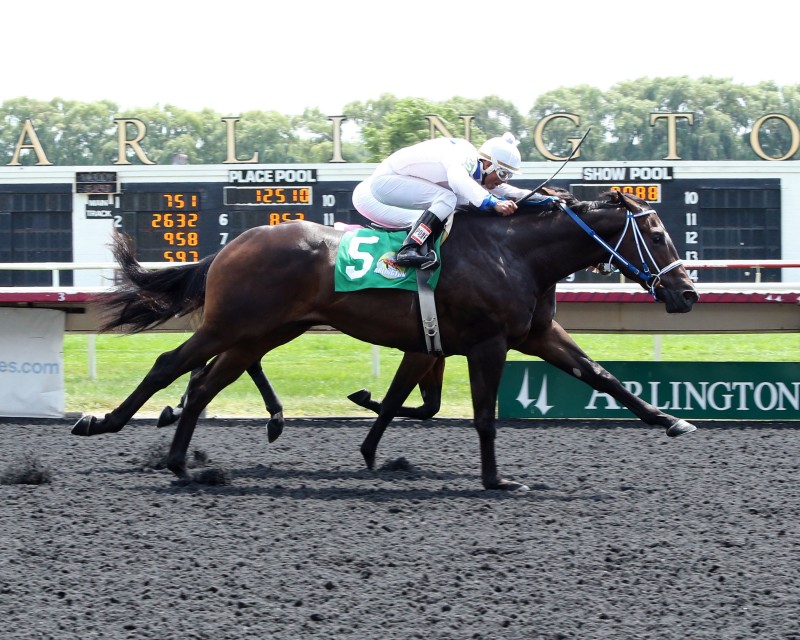 Dabo came from the clouds to win his debut at Arlington.

West Point Thoroughbreds will send out a trio of stakes runners on March 9, with Dabo targeting a Grade 3 race at Turfway Park that is part of the Kentucky Derby prep schedule while Shivermetimbers and Excess Capacity will contest Listed races at Aqueduct.

“Fox Sports Saturday At the Races” will carry live coverage of both cards in a broadcast from 4-7 p.m. Eastern on the FS2 channel.

Dabo gained his first stakes credentials at Turfway last month and now is set to tackle the track’s premier event on Saturday in the Grade 3, $200,000 Jeff Ruby Steaks, offering 20 Kentucky Derby qualifying points to the victor.

Reserved early, Dabo came running in the stretch of the 8 1/2-furlong John Battaglia Memorial and finished third, beaten 4 1/2 lengths by Somelikeithotbrown, who had previously finished a close third in the Breeders’ Cup Juvenile Turf.

“Dabo definitely ran a good race last time and I thought he could have been second,” Mike Battaglia said. “It was a slow pace and he had to go seven or eight-wide. He wasn’t going to beat the winner, but he lost a lot of ground. I don’t think John McKee rode a bad race [on Dabo], it was just a slow pace and that’s what Johnny had to do.”

Dabo drew post four of 11 and is 10-to-1 on the morning line for the 9-furlong Jeff Ruby Steaks, which goes as race 11, with a scheduled post time of 6:37 p.m. Eastern. Somelikeithotbrown, the 8-to-5 favorite, will begin from gate 11.

Picking up the mount on Dabo is Luan Machado, who began this week as Turfway’s leading jockey with 23 wins. Machado, 24, moved his tack to America this winter from his native Brazil, where he won a Group 1 Breeders’ Cup qualifier in 2018.

West Point acquired Dabo privately last summer on the advice of trainer Dale Romans, based on the colt’s explosive rally from last to first to win his career debut at Arlington Park on Polytrack, the same surface in place at Turfway.

A newcomer to the West Point roster, Excess Capacity will test stakes waters at the Big A in a field of 12 for the $250,000 Busher Stakes for three-year-old fillies.

West Point, Madaket Stables and Rob Masiello purchased Excess Capacity privately after she broke her maiden on January 4 over this track and one-mile distance. She will be making her first start in the care of Hall of Fame trainer Steve Asmussen.

Jose Lezcano will guide the daughter of Malibu Moon from post six over the one-turn layout.

Earlier in the afternoon at Aqueduct, Shivermetimbers will swoop in from the West Coast to team with Hall of Fame jockey Javier Castellano in the $150,000 Stymie Stakes at a mile for older horses.

Shivermetimbers, a four-year-old, finished third in the Shared Belief Stakes at Del Mar last summer and won a 7-furlong allowance race there in November. He is coming off a fourth-place finish to Ax Man in a tough Santa Anita allowance on February 9. Trainer Jerry Hollendorfer decided to ship the four-year-old East along with stablemate Instagrand, who will be competing in Saturday’s Grade 3 Gotham Stakes.