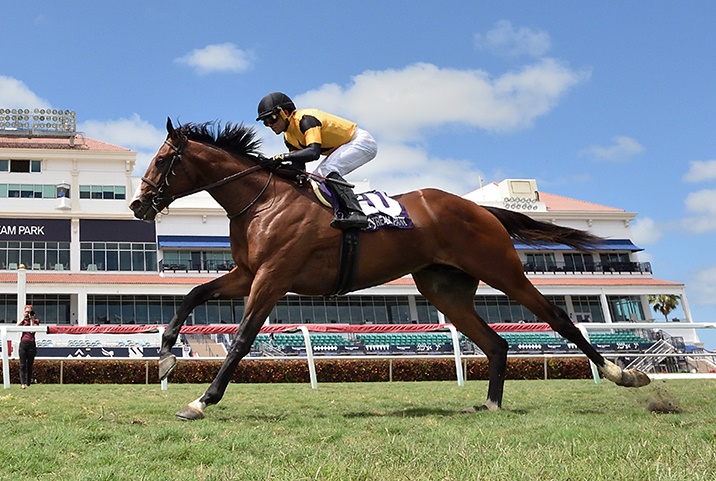 A different Belmont Stakes Day but, nonetheless, one of the biggest race days of the season and WPT will be represented in two Graded stakes on the turf, with Decorated Invader favored for the Grade 2 Pennine Ridge Stakes and Kanthaka tackling the Grade 1 Jaipur Stakes.

Decorated Invader is 6-to-5 in the program after launching his 3-year-old season with a victory in the Cutler Bay Stakes at Gulfstream Park. Joel Rosario will be back aboard. A Grade 1 winner at 2, Decorated Invader is gearing up for NYRA’s series of major stakes for sophomores on the grass, with the $1-million Saratoga Derby on tap next on August 4 at a mile and three-sixteenths.

“Decorated Invader is doing great. He’s had two very nice breezes at Belmont with Joel aboard and he couldn’t be doing better,” Clement said. “I think he’s a top class horse and the distance should be perfect for him.”

The Pennine Ridge will air on Fox Sports 2.

Decorated Invader Circling the Field in the Cutler Bay:

Kanthaka is a Grade 2 winner on the West Coast who will be making his first start since moving into Graham Motion’s Maryland-based barn. His most recent race was his grass debut, a late-running third-place finish in the Grade 3 Daytona Stakes last May at Santa Anita.

“He’s a classy horse, looking forward to getting him back going,” Graham Motion said.

The Jaipur will air live during the Belmont Stakes broadcast on NBC’s main channel.

Kanthaka Winning the Grade 2 San Vicente Stakes as a 3-Year-Old: