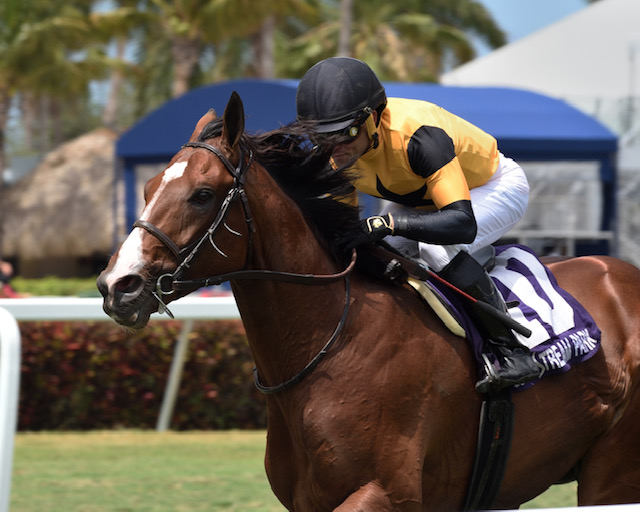 A Grade 1 winner at 2, Decorated Invader kicked off his 3yo season in high style on Saturday with a wide rally from far back to win the Cutler Bay Stakes going away.

The Keeneland September yearling sale purchase overcame the 10 post position, which had an anemic win percentage at a mile on the Gulfstream grass, flashing home under Joel Rosario to stop the clock in 1:33.12.

Decorated Invader won the top-level Summer Stakes at a mile at Woodbine in his stakes debut last September, before finishing fourth with a troubled trip in the Breeders’ Cup Juvenile Turf.

“He’s a big horse. Christophe told me to give him a clean trip,” jockey Joel Rosario said. “So when I started moving a little bit I preferred to be in the clear on the outside. He came with a nice run. He was the best horse in the race.”

“He is the one, he is the real deal,“ Christophe Clement said. “I thought he was impressive yesterday. It’s nice to know he is as good after the break as he was before the break. He came back in good order.”

This was a big sigh of relief to get this race in with all the upheaval around us and most racetracks postponing dates. There is no rush now and we’ll have to see what shakes out with the racing schedule, but one obvious target is the $200,000 Pennine Ridge Stakes (G2T) run at 9 furlongs on the Belmont Park grass on Saturday, May 30, which leads up to the NYRA Turf Triple: the Belmont Derby (G1T) on Saturday, July 11, the Saratoga Derby in August and the Jockey Club Derby in September.