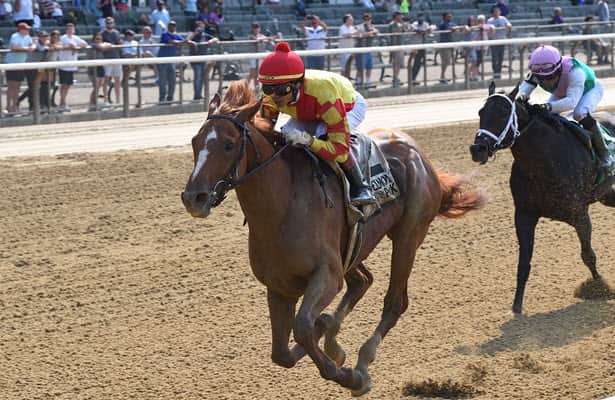 First Captain answered the call as the heavy favorite in Monday’s $250,000 Dwyer Stakes (G3) at Belmont Park, powering through the stretch to win going away and improve to 3-for-3 lifetime.

A Saratoga select yearling purchase in 2019, the 3-year-old colt stamped himself as a contender for the Grade 1 Travers Stakes (G1) run at 10 furlongs on August 28 at Saratoga.

The way First Captain succeeded with a long drive in the one-mile Dwyer, he gave West Point’s Terry Finley and Hall of Fame trainer Shug McGaughey the impression that he will continue to progress with more distance.

“He’s never going to be a horse that just dazzles you, but you can tell he’s just starting to get going,” Terry said. “We’re very happy with him. We would have loved to have got him a little further in his third start, but it just wasn’t to be.”

First Captain won his debut going 7 furlongs on April 24 and scored at a mile in an allowance on May 29 to earn TDN Rising Star status.

“He was a lot steadier today. I knew he was winning his first two races on ability, but I didn’t really know what to think of him,” Shug said. “Today, he showed me something, especially that two turns is going to be in the bag, I think. I liked the way he took the dirt; he took it a lot better today than he did the last time. He was a little further back than I thought he would be. But that’s why they are what they are. I thought we were in pretty good shape coming up to the quarter-pole.”

Guided by Jose Ortiz in all three of his starts, First Captain also races for Siena Farm, Woodford Racing and his breeder Bobby Flay.