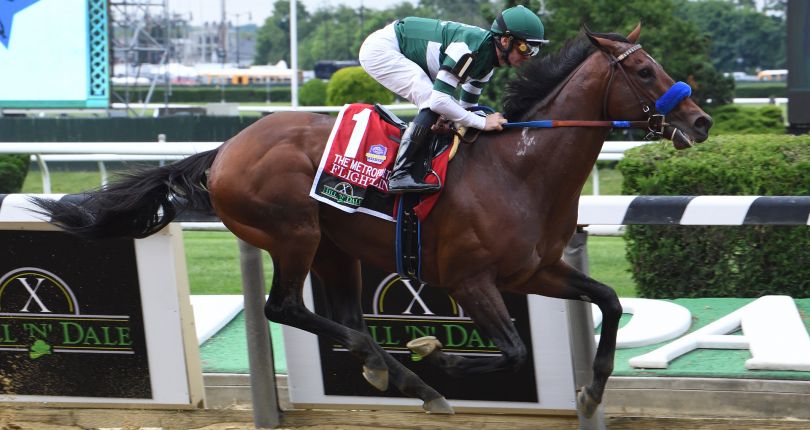 Flightline showed up and showed everyone what he is all about in the $1-million Metropolitan Handicap (G1) on June 11, drawing off to a 6-length win under Flavien Prat.

Honed to a fine edge by John Sadler for his first race of the year, the 4-year-old colt overcame a slow start, breaking last in the field of five and then having to check in traffic early. Prat rode him with complete confidence, collaring second choice Speaker’s Corner in the sweeping turn and pouring it on, opening up a daylight advantage at the top of the stretch and cruising home to cover the mile in 1:33.59.

Larry Collmus called it right from the announcer’s booth: “He’s flawless and he’s freakishly fast! That’s as good as it gets!”

“It’s a thrill of a lifetime,” Sadler said afterward. “Never seen one like him.”

Elaborating, John said, “We’re just thrilled to have an undefeated horse, who won easy again today. Things didn’t really go well for him early in the race. He suffered from a slow start because of the one post. Then he got cut off a little bit going down the backside. With a young horse who’s not that well-seasoned, he just overcame the adversity and proved himself best. He overcame trouble. That’s the storyline. He had a rough trip and took up a couple times but still circled around and proved much the best.”

Flightline is unbeaten in four career starts, by a margin of more than 43 lengths!

A toast at Belmont from Terry Finley: