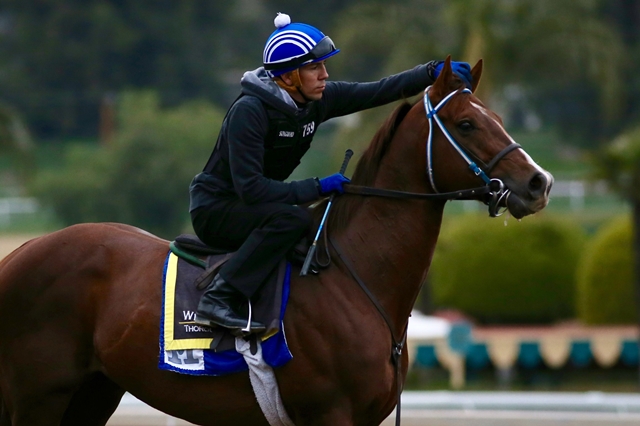 Kanthaka is a multiple Graded stakes winner, purchased as a 2yo for $140,000.

A classy dirt sprinter switching things up with a turf assignment, a three-year-old colt heading north of the border after a recent win, and a long-winded filly moving up in class with an ultra-consistent record—all make for a fun mix of stakes opportunities for West Point Thoroughbreds this weekend.

Kanthaka has been a nice success story for trainer Jerry Hollendorfer in Southern California, winning a pair of Graded stakes sprints and earning $340,000 on the main track after West Point plucked him out of a juvenile sale there for $140,000. A switch to turf is in the offing in Saturday’s Grade 3 Daytona Stakes at Santa Anita as his connections try an experiment, thinking that his turn of foot as a proven deep closer could translate very well to the grass.

Kanthaka is the only previous Graded stakes winner in a field of seven for the 5-furlong Daytona, a race that has produced four of the last 10 winners of the Breeders’ Cup Turf Sprint, including the two-time Cup hero Stormy Liberal, who won the Daytona in 2017 and finished second in 2018. Regular rider Flavien Prat sticks with Kanthaka.

Another late-runner, Dabo, will be on a Canadian mission on Saturday in the Grade 3 Marine Stakes at Woodbine for Kentucky-based trainer Dale Romans, who is fresh off a second-place finish in the Preakness Stakes last weekend with Everfast. Dabo circled the field and drew off to an allowance victory on Arlington Park’s Polytrack surface on May 3 and he will take the opportunity to run on another synthetic surface at Woodbine. Rafael Hernandez has the call in a field of just five.

At Churchill Downs, Room to Finish will step up to the stakes ranks for the first time in the $75,000 Keertana Overnight, run at 12 furlongs on the turf for fillies and mares.

Room to Finish has never been worse than second in seven career starts, including a game second-place finish in an allowance at Keeneland on April 18 when she stretched out to 12 furlongs off a victory going 8 1/2 furlongs at Fair Grounds in March. Channing Hill will pilot Room to Finish for his father-in-law, Wayne Catalano, in a field of six.