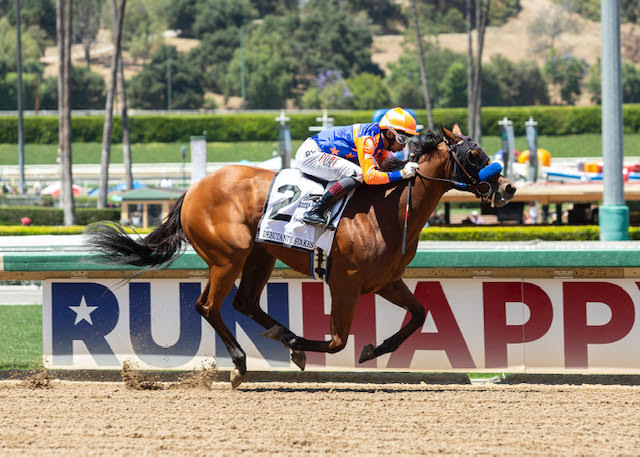 Stone Silent spoke right up in her debut Saturday, becoming a stakes winner in short order in the $100,000 Fasig-Tipton Debutante for juvenile fillies at Santa Anita.

Acquired less than 3 months ago at the OBS March sale, Stone Silent shot to the front and opened up a commanding lead at the top of the stretch, prevailing by 3 1/2 lengths underneath jockey Ramon Vazquez.

John Sadler trains the Florida-bred filly by Adios Charlie and out of stakes-winner Travelator. Talla Racing and Ed Barker co-own the filly.

John said, “I think some of the commentators picked up on the fact that she worked 20 and two in the sale, so she’s very quick. We were hoping that she went through and could run early because I knew she had a ton of speed. Ramon was good, he came out and worked her three times and knew her. We hadn’t really pressed her hard in the morning, we just got her fit because we knew the speed was in there.

“She’ll go into the stakes program for two-year-old fillies at Del Mar.”