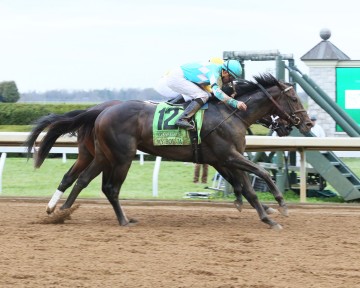 Recent winner of the Lexington Stakes (G3) at Keeneland, My Boy Jack has 52 Kentucky Derby qualifying points. Beaten just three lengths in the G1 Breeders’ Cup Juvenile Turf, the colt hasn’t been off the board in four starts as a 3-year-old. He was third in the Sham Stakes (G3) in January at Santa Anita, won the Southwest Stakes (G3) in February at Oaklawn, and then narrowly missed in the Louisiana Derby (G1) at Fair Grounds before his score in the Lexington.

“I’ve always liked this horse and admire his versatility,” said West Point’s Terry Finley. “There’s great karma surrounding this colt and his connections, and he’s come out swinging this year despite several tough trips. We’re grateful for the opportunity to join an awesome ownership group and thrilled to provide a dedicated group of our partners the chance to once again experience the magic of the Derby dream.”

Bred by Brereton C. Jones in Kentucky, My Boy Jack is out of the Mineshaft mare Gold N Shaft. Consigned to the 2016 Keeneland September yearling sale by Legacy Bloodstock, agent, Don’t Tell My Wife Stable purchased the colt for $20,000.