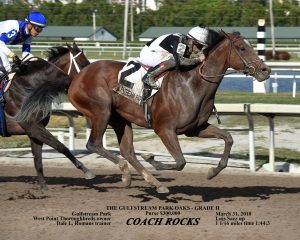 Roddy Valente, RAP Racing, and West Point Thoroughbreds’ Coach Rocks stamped her ticket to the Kentucky Oaks with a dazzling win in the Gulfstream Park Oaks (G2) over the weekend. She earned 100 Oaks qualifying points for the win, vaulting her to 2nd on the Kentucky Oaks leaderboard. Watch interview with Terry Finley right after the race.

Five West Point Partners are fulfilling the dream of racing for the lilies at Churchill Downs with their sweet daughter of Oxbow.

West Point bought into the Dale Romans trained filly after Terry Finley watched her breeze “lights out” on March 17 following a stylish maiden win around two turns. The investment paid off quickly, and the filly made the jump from maidens to stakes competition seamlessly after being bet down to 5/2 from her 8/1 morning line.

“She figured the game out, “said Romans. “I never expected her to lose. Every time I’ve brought her over, I thought she would win. It took time for her to figure it out that she is as good as she is,” Romans said. “When she swung out wide and found her rhythm, I thought she would grind them down. I know she’s fit and distance wasn’t an issue.”

“This filly is the real deal,” said Finley. “I watched her work one morning at Gulfstream and turned to Dale and said, “who is that?” I reached out to Rick Pitino, and we were fortunate to get the deal done and get a great group of Partners involved with her. I’ve never met a filly with a better mind — nothing bothers her, and she’s a sweetheart in the barn. The way she did it on Saturday, she’s got a super legit chance to win the Oaks.” 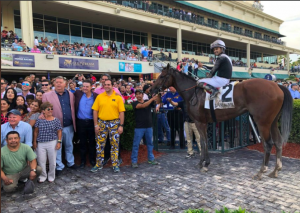 In the opener on the Florida Derby day card, Reason to Soar returned off a layoff to score in a Florida-bred allowance race with a $75,000 pot. Trained by George Weaver, the stakes- placed son of Soaring Empire was making his first start since the summer at Saratoga.

Eclipse Award winning jockey, Jose Ortiz was all smiles after he dismounted saying, “He just did everything so easy today. My horse just glided up on the leader, without encouragement, so I decided to let him roll and not take momentum away from him. Down the stretch when he switched leads, I knew we were home.”