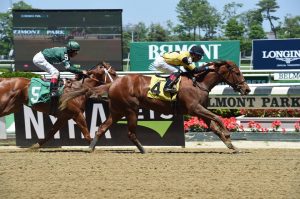 Saturday is a huge day of racing for West Point Partners on both coasts, with five runners going postward in stakes races.

Promising 3-year-old fillies Originator and Best Performance compete in the $150,000 Sanibel Island Stakes at Gulfstream Park. West Point purchased an interest in Ian Wilkes trainee Originator following her dominating maiden win in January. She then finished second in her first try around two turns on February 21 at Tampa Bay Downs.

Breeders’ Cup Juvenile Fillies Turf (G1) runner-up Best Performance makes her seasonal bow for Christophe Clement in the Sanibel Island. She’s the morning line favorite in a race in which all fillies are eligible for the first level allowance condition. Watch a recent interview with Clement about the filly. Purchased by the West Point buying team at the 2017 Fasig-Tipton Gulfstream Sale, the daughter of Broken Vow broke her maiden in May before finishing second in five straight stakes races. Her earnings stand at $385,100.

Kentucky Derby winner Always Dreaming (G1) makes his seasonal bow a few races later in the $300,000 Gulfstream Park Hardacre Mile (G2). The son of Bodemeister was treated for stomach ulcers following the Travers Stakes (G1) and has since strung together a series of good works at Palm Beach Downs.

“I was satisfied with his breeze on Saturday,” Pletcher said. “There are a lot of reasons why this race makes sense, including his success at Gulfstream and the fact a mile is kind of an ideal distance to start him back. I really like the scenario, and feel great about the way he has filled out and matured from 3 to 4.”

Post time for the Gulfstream Mile is 3:13 ET. Always Dreaming breaks from post two in the field of only six under regular pilot John Velazquez.

Coach Rocks steps onto the Kentucky Oaks trail in the $300,000 Gulfstream Park Oaks (G2). West Point acquired an interest in the filly after Terry Finley watch her breeze on March 17. The tall and leggy daughter of Oxbow is a live longshot in the race having earned an 81 Beyer when breaking her maiden on February 14 for Dale Romans.

Rounding out stakes Saturday is Chilean Derby hero Full of Luck in the $200,000 San Francisco Mile (G2T) at Golden Gate Fields. Trained by Jerry Hollendorfer, the son of Lookin at Lucky was imported to the United States in December. He hit the board in 9 of 12 starts in Chile, with his biggest win coming in the Chilean Derby in front of 70 thousand people in February 2017.

He’s strung together a series of solid works at Santa Anita, and top jock Flavien Prat is making the trip to Northern California to ride.