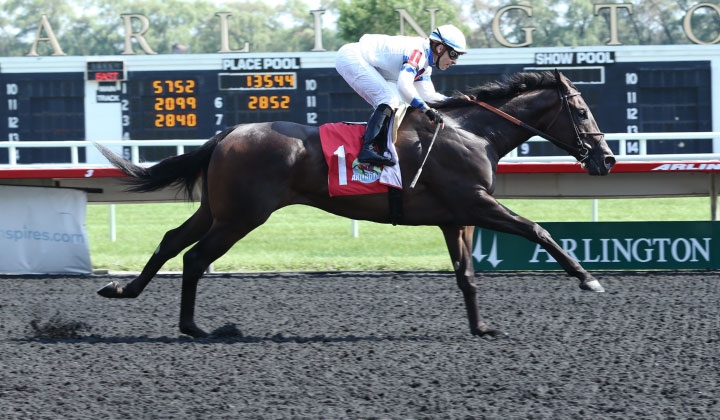 Dabo delivered a rollercoaster experience in scoring his first stakes win in the Springfield at Arlington International Racecourse outside Chicago on Saturday.

The heavy favorite in a field of four, Dabo was content to drop back some 20 lengths off the pace early as two rivals slugged it out for the lead.

Along the backstretch in the mile event for Illinois-breds, Dabo and jockey Jose Valdivia Jr. were still so far back that they were not visible on the video broadcast, that is until two things happened going into the far turn: the dueling pacesetters both began to fade, and Dabo kicked in with a strong rally. Quickly erasing the big deficit, Dabo hit the front with three-sixteenths of a mile remaining and drew off to win by 5 1/4 lengths, looking every bit of his 3-to-5 odds, even if the manner of victory gave his connections a few anxious moments.

“He’s such a nice horse,” Valdivia said. “He’s very comfortable sitting all the way back and when I picked him up he responded and he just keeps going. When he got to the lead he does it so easy so he idles a little but I kept him to task. This horse, loves this place and I love him.”

On hand to welcome the extra-tall 3-year-old colt in the winners circle were about 30 supporters from West Point Thoroughbreds as well as co-owner Peacock Stable, a group that includes long-time racing analysts and NBC commentators Mike Battaglia and Tom Hammond, NFL Hall of Famer Cris Collinsworth and restaurant owner Jeff Ruby.

Battaglia, the oddsmaker for the Kentucky Derby since the mid-1970s, was registering his first stakes win as an owner.

“He’s really a special horse,” Battaglia said. “All credit goes to Dale Romans and West Point Thoroughbreds for this one. They called me and asked if I wanted to be a part of this horse and its so great to get my first career stakes win here at Arlington after working here for years. It’s been such a cool experience.”

Romans and West Point picked up their second stakes win of the week together, as Seven Trumpets also triumphed in the Good Lord at Ellis Park on July 21.

Dabo, based at Churchill Downs, is likely to return to Arlington for the Bruce D. Memorial Stakes on August 10.