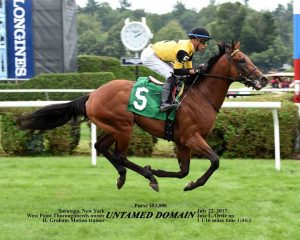 Graham Motion trainee Untamed Domain tries dirt in the $400,000 Tampa Bay Derby (G2) following a good third in his seasonal bow, the Dania Beach Stakes on February 3 at Gulfstream Park. The son of Animal Kingdom broke his maiden at Saratoga last year, won the Summer Stakes (G2) at Woodbine, and then finished his juvenile year with a bang-up second in the Breeders’ Cup Juvenile Turf (G1)

Following the Dania Beach, Untamed Domain moved to Tampa and posted two solid works over the main track. He’s been under the care of Graham’s assistant Cat McGee who is shown here loving on tall, dark, and handsome!

His Partners have united as the “Domainiacs” and most of the mare coming to the Oldsmar oval to cheer their colt on.

The colt breaks from post 9 in the Tampa Bay Derby under regular pilot Joe Ortiz. Post time is 5:20 ET. Two entrants, Free Drop Billy and Enticed are expected to scratch and run in the Gotham Stakes at Aqueduct.

The San Felipe is the most contentious prep of the year so far, with impressive grade one winners McKinzie and Bolt d’Oro entered to run.

Kanthaka turned many heads, earning a 99 Beyer Speed Figure and 5 Ragozin Sheet number when showing an explosive turn of foot under Flavien Prat in the San Vicente.

Will the son of Jimmy Creed show the same brilliance around two turns? Hall of Famer Jerry Hollendorfer thinks so.

“The way he won the San Vicente and the way he’s been working over the racetrack, we think we have a chance,” said Hollendorfer. “We thought about going to New York for the Gotham, but ultimately decided to stay home considering how well our colt has run at Santa Anita. And with the weather in New York, I think it all worked out for the best.”

“We hope there’s a hot pace up front and just want to see our colt come running to keep the dream alive,” says West Point president Terry Finley. “In the San Vicente and his recent works, he’s finished up with ears pricked — he just loves his job.”

But just as intriguing is whether KANTHAKA can show the same explosive turn of foot going two turns that he demonstrated in the seven-furlong San Vicente Stakes when he inhaled the field in just a few strides. In his maiden victory we saw that turn of foot later in the race, as he came charging in the final sixteenth to just get up by a neck. In his work last week, he was on the other end of that big move when another worker pounced on him from out of nowhere nearing the head of the stretch. He pulled on even terms, but Kanthaka wasn’t about let this intruder get by him and was merely toying with him down the stretch, pulling away in the final yards, despite the other horse being in a full drive. He normally would be the quintessential Derby horse with the push-button acceleration you are looking for, except for the fact that his sire and broodmare sire were both pure sprinters and his unraced dam sold twice for a meager $5,000 and $4,000. If he has one thing to fall back on it is his tail-female great grandsire Dr. Carter, who won or placed in 12 stakes, including the 1 1/4-mile Gulfstream Park Handicap and whose dam is a half-sister to In Reality. He also is inbred on his dam’s side to the top classic sire Caro, so there is some stamina in his pedigree.

Kanthaka breaks from the outside in the field of eight under Flavien Prat. Post time for the San Felipe is 2:30 PT/5:30 ET. 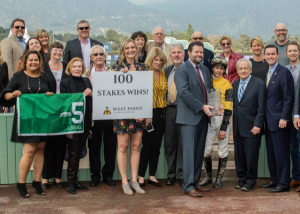