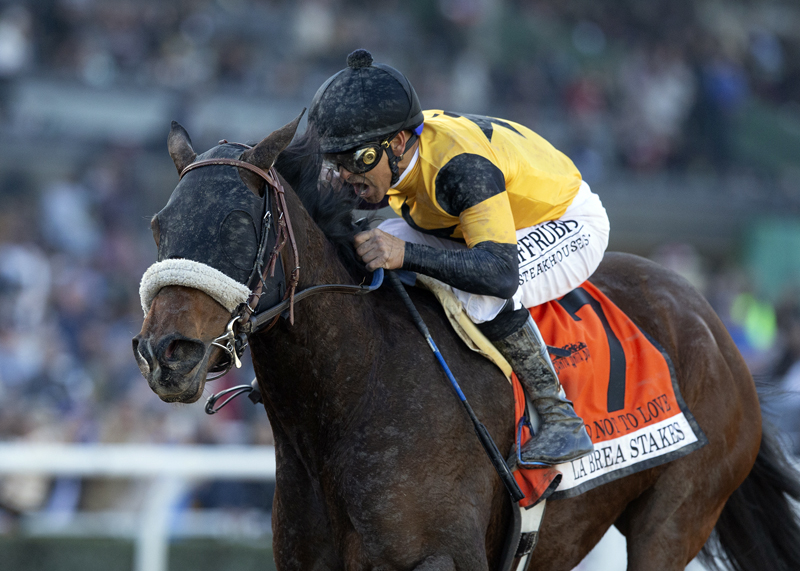 Hard Not to Love winning the Grade 1 La Brea Stakes on opening day at Santa Anita in 2019.

The Thoroughbred Daily News had a love-letter kind of piece on Aqueduct today and spurred me to think through a short list of favorite winter racetracks.

Years ago I fell in love with opening day at Santa Anita, I think as much as an escape from the house as anything, headed to simulcast land the day after Christmas and throughout that week into New Year’s Day. It was like an extended all-star game, previewing the entire meet with a huge crowd on hand. What a concept, and you can see to this day that while the racing scene has changed out West, opening day at Santa Anita is a great institution.

Fields are shorter these days in California but you can still expect to see something special just about every Saturday, whether it’s a debut winner announcing his or her presence for the Kentucky Derby or Oaks trail, a showdown in the Graded stakes prep races, or the coronation of a star in the Malibu Stakes with a City of Light, a Rock Hard Ten, or even (if it could possibly happen again) a Flightline.

One January I was there at Santa Anita (actually on assignment for the Eclipse Awards) doing a double-take looking over the program in the paddock when Tiago was still a maiden, coming off a third-place finish in his debut. What caught my attention was that he was a half brother to Giacomo, the Kentucky Derby winner two years earlier for the same connections, and secondly that Tiago had run a sneaky strong race first-time out. And so it was fun to see Tiago come running that day and break his maiden, before going on to score a big upset in the Santa Anita Derby.

Those kind of horses are still lurking around all kinds of corners at Santa Anita, with so many capable, Hall of Fame-level trainers on the roster there.

And the Great Race Place has a great turf course, which is the one knock on Oaklawn Park, another winter track that I would love to spend any winter day at, probably just nudging Gulfstream for the second spot on my list of winter track favorites.