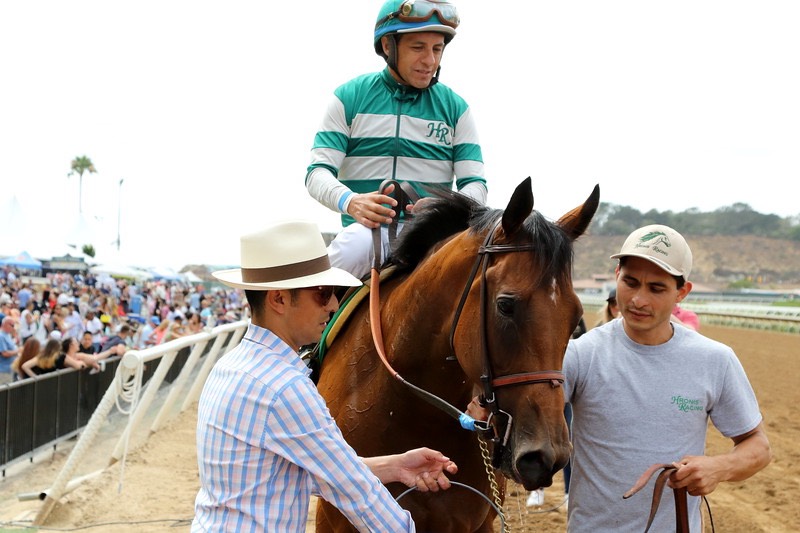 Juan Leyva, left, with Inspiressa before her debut win.

John Sadler has built one of the best racing stables in the country over the last three decades, but he believes that right now is the strongest his operation has ever been in a key area, the assistant trainers who help run his barns at Santa Anita Park and Los Alamitos Race Course. What is somewhat unique about Sadler’s top assistants, Juan Leyva and Alex Bisono, is that they both are former jockeys.

Leyva (top photo) is only eight years removed from the peak of his career as a jockey when he was the regular rider for champion female sprinter Musical Romance, whom he guided to victory in the 2011 Breeders’ Cup Filly and Mare Sprint at Churchill Downs. Bisono also won multiple graded stakes races as a jockey in Southern California from 2003 to 2014.

Sadler now counts on their riding expertise, horsemanship, and dedication in helping to oversee a California stable laden with stakes quality, which was on display this summer when Sadler runners captured six graded stakes at Del Mar, not missing a beat following the retirement of 2018 Breeders’ Cup Classic winner and champion older male Accelerate.

“This is the strongest I’ve ever been with assistants,” Sadler said. “Juan and Alex really are twofers. It’s a huge advantage. They ride beautifully and give you a tremendous amount of input from that perspective, and they both are very well-rounded horsemen. They are high character guys who want to work.

“I’ve seen a million jockeys who don’t want that kind of role when they’re done with their careers, so it does make them unique. They both have the temperament for it and the passion.“

Leyva has known Sadler for almost 20 years, since he first started riding races as a 16-year-old in 2000, and their introduction hardly suggested what their working relationship would become.

“He let me work a horse for him at Santa Anita and I thought, ‘I’m going to show off what I can do,’ so I turned for home and I whipped the horse right-handed, and then I switched hands and hit the horse left-handed and thought I was doing something really awesome,” Leyva said with a laugh. “When I got back to the barn, John yelled at me, ‘What are you doing? We don’t hit our horses in the morning!’“

Sadler let that go and was instrumental in some of Leyva’s early opportunities as a jockey as well as his decision to move his tack to South Florida in 2005. It was in Florida that Leyva forged a strong bond with trainer Bill Kaplan, who trained Musical Romance.

“I always wanted to end up back home in California,” Leyva said. “John had offered me a job once before and then in 2017 I was ready. My business as a jockey was down, the quality of stock just wasn’t there, and there was an opportunity to work for John, and I wasn’t going to turn that down again.

“I started out running his barn at Los Alamitos, and I didn’t like it at first. I wanted to be with him at his main barn at Santa Anita so I could learn from him, but he wanted me to get that experience first at Los Al and have that foundation to build on. He told me that’s why a lot of jockeys don’t make it as trainers, they don’t have the right schooling before they jump in. I have to say I have been blessed, it was right around the time Accelerate was coming into his own, Catalina Cruiser had just broken his maiden, and he had a bunch of really nice horses about to take off.

“I think it’s worked out well for everyone. It’s a huge edge for an assistant to be getting on the horses and provide that perspective. There are certain things that you can’t see, you can only feel.“

Leyva did end up with Sadler’s main string at Santa Anita within about six months and eventually recommended Bisono as his successor at Los Alamitos.

Bisono and Levya knew each other well as jockeys, and Bisono, who retired from race riding in 2014, had been working for trainers Richard Mandella and Dan Blacker.

“It was a great fit for me to move over to John and run his barn at Los Al and get that experience working for him and with a lot of really nice horses,” Bisono said. “It’s totally different than when you’re a jockey, as an assistant you are dealing with a lot of different things. As a jockey, you’re only worried about riding the races, not so much how you get a horse to the race, which is what this job is all about. I wouldn’t say it was an easy transition for me. It’s been a lot of hard work, a lot of hours, but I’ve been lucky to work for trainers who have been gracious and let me make mistakes and learn from them and get better.

“It’s fulfilling in a different way too. When you help develop a horse, say a 2-year-old, who wins or runs well, it’s very fulfilling. You’re just proud to be a part of it.“

West Point Thoroughbreds has increasingly turned to the Sadler barn in 2019, now up to eight horses in his care, and several more on the way in 2020, including a $1-million Tapit colt acquired at the Fasig-Tipton Saratoga yearling sale this past summer. Sadler trains Grade 1-placed Inspiressa for West Point and Hronis Racing and recently received West Point’s multiple stakes winner Galilean, on the comeback trail after testing the Triple Crown trail earlier this year.

“Communicating with owners, especially a partnership like West Point with a lot of people involved, is something I take seriously, and you really learn to do it right being a jockey,” Leyva said. “You know how important it is to make people feel welcome, to be friendly, greet everyone, to look people in the eye, and do it as a team. And when you win, you get to enjoy it together. I love that.“