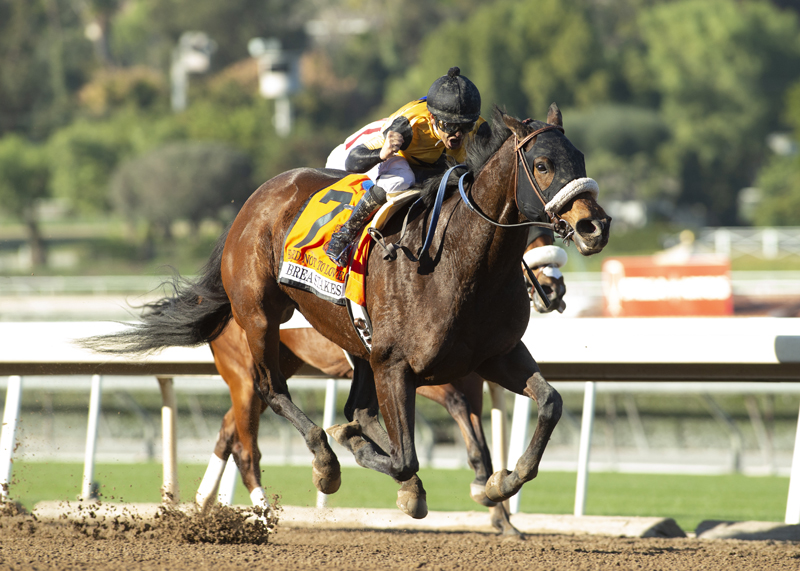 An exclamation point for West Point Thoroughbreds’ 2019 season came from a remarkable filly on December 28 at Santa Anita. Hard Not to Love, who lost her left eye as a young horse, became a Grade 1 winner in the La Brea Stakes, storming home from last to first under Hall of Fame jockey Mike Smith.

Hard Not to Love improved to 4-for-5 lifetime for trainer John Shirreffs, who has worked wonders with a filly who has presented plenty of challenges and turned in a career-best performance despite getting worked up in the preliminaries on Saturday.

“She is missing the one eye and she has anxiety attacks,” Smith said afterwards. “John Shirreffs and Cisco Alvarado and the whole team have done so much work with her and to see it pay off like this is amazing.”

This trip to the winner’s circle was extra special for Smith, who registered his 216th Grade 1 victory, tying fellow Hall of Famer Jerry Bailey for the all-time record. Smith broke the record about an hour later on Omaha Beach in the Malibu Stakes, the La Brea’s male equivalent race. Hard Not to Love ran seven furlongs about a fifth of a second faster than Omaha Beach, stopping the clock in 1:22.17.

Hard Not to Love is the 13th Grade 1 winner for West Point Thoroughbreds and second of 2019, as she joined Decorated Invader, who captured the Grade 1 Summer Stakes at Woodbine in September. Both were purchased as yearlings through bloodstock adviser David Ingordo. David and his mother Dottie Ingordo-Shirreffs, John’s wife, are part owners of Hard Not to Love.

On hand at Santa Anita were Ken Burke, Keenan and Cassie Freeman, Jim Pearl and Emily Young of the West Point partnership campaigning Hard Not to Love.

“I’d like to thank the partners because it all starts with them,” West Point CEO Terry Finley, in attendance with his wife, Debbie. “We were all excited about the race. We felt the big favorite (Bellafina) on paper would be tough to beat but that is why they run the races and I’m just proud of the entire team.

“I love the people from all over who are dedicated to our industry and our horses. If we do that every single day I think or game is going to be better. We are all focused on 2020 and we are going to make this industry better.”

Bred in Ontario by Anderson Farms, Hard Not to Love is a half sister to Canadian Horse of the Year and classic winner Wonder Gadot.