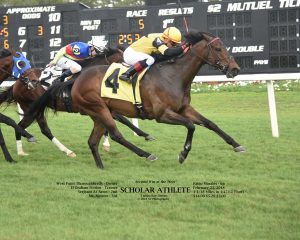 Scholar Athlete made his second trip to the Tampa Bay Downs winners circle this season, scoring in a tough allowance race on Friday. He prevailed by three-quarters of a length over stablemate Serjeant at Arms, referred to by many in his native land as the “Secretariat” of Indian racing.

“Scholar” as he’s affectionately known around the Graham Motion barn now has five wins to his credit. By Einstein, he finished fourth in the 2016 Queen’s Plate and was third in the Commonwealth Derby (G3) at Churchill Downs that fall.

Scholar Athlete was purchased by the West Point buying team from breeder Adena Springs at the 2015 Fasig-Tipton 2-Year-Old in Training Sale held at Gulfstream Park.