For Dr. Richard and Natalie Alker, Seven Trumpets turned out to be the perfect fit as their first horse with West Point Thoroughbreds. And now that goes both ways around: today he is settling into retirement at their farm in Florida, joined by another former West Point horse who had a much different fortune as a racehorse.

Seven Trumpets, a stakes-winning 5-year-old, was retired this fall after convincing his connections that he was no longer up to his previous level of performance in stakes or high-level allowance races. They had no appetite to see him drop down into the claiming ranks.

Seven Trumpets, a $205,000 purchase as a 2-year-old in training, had taken his group of about 30 partners on a wonderful ride with five wins, more than $500,000 in earnings, a second-place finish in the Grade 1 Allen Jerkens Stakes at Saratoga and a Breeders’ Cup appearance. He is far from imposing in stature but earned the nickname “Little Big Man” around the Dale Romans barn for how tall he stood out on the racetrack.

West Point Thoroughbreds is actively involved in ensuring a secure retirement, ideally with a second career, for horses in the stable once the day comes that they need to retire from the racetrack. With Seven Trumpets, that transition process was seamless, as the Alkers immediately volunteered to bring him home to their farm, Crown Thoroughbreds, in Ocala.

Dr. Richard and Natalie Alker at the races with Seven Trumpets.

The Alkers were new to public racing partnerships when they got involved in Seven Trumpets, but they were hardly new to horse ownership. Dr. Alker is a retired veterinarian and now lists and sells veterinary practices as a broker. Natalie manages their farm, with a background in showing and training pleasure horses and as an intructor. The Alkers put together pinhooking, broodmare and racing groups for many years before they decided to jump into a public partnership with West Point. All along they were thinking ahead to a horse’s long-term future.

The Alkers attended most of his races, a career that catapulted him from Kentucky (including four wins at Churchill Downs) on to Santa Anita, Del Mar, Belmont Park and Saratoga.

“We bought into him sight unseen, which was something we wouldn’t usually do,” Richard said. “We had been thinking about getting into a partnership and we decided to jump in that spring and West Point had eight or 10 horses from the 2-year-old sale on the website and picked him out because of his athletic look. Obviously, it was a good choice and he took us on a great ride. We enjoyed the heck out of his whole career. And it’s a great group of people involved in him. We’ve become good friends with some of the Seven Trumpets partners. It was just a wonderful experience.”

In late September, the connections called time on Seven Trumpets’ as a racehorse. In late October he arrived to the Alkers’ farm. He is sound and Natalie Alker believes he will be a strong candidate for a career as a hunter or jumper, even if his stature puts him a bit outside the box.

“He’s small horse in heighth and kind of fine-boned,” she said. “To a lot of the performance people in eventing and jumping, that’s not very desirable. They want the big-tall, heavy-boned, huge horses, so that was going to be an issue for him, but having said that, with him being such an athlete, there will be a spot for him. It’s just going to be finding that niche. He is a sweetheart, and it’s kind of hard to believe for a horse that had so much heart and grit on the racetrack. We’re thinking he will wind up as either a kid’s small hunter or he will be one of the smallest, fastest jumpers out there.”

Shortly after Seven Trumpets arrived in Ocala, he was joined by another horse the Alkers had bought into with West Point, a 3-year-old named Tomorrow Knows, with a much different profile and outlook as a retiree. Tomorrow Knows made one start on the racetrack in Southern California before he was diagnosed with compression on the spinal cord, requiring surgery to fuse the vertebrae so that he could move forward with an adequate quality of life. His racing days were over, but following surgery and rehabilitation at Trifecta Equine Center in Southern California, he was ready to move on. The Alkers stepped up again to provide him a home at Crown Thoroughbreds.

Tomorrow Knows is turned out in a small paddock and will eventually be moved into the farm’s larger paddock, to be joined by a buddy.

“He has settled in well and he still has a good amount of athletic ability in him,” Richard said. “He is in a small paddock and he gets to running in there and you can see it, especially with what he’s been through. He has a little issue with the range of motion in his neck but he is still athletic. When he lays down, he jumps up very easily. He’s not uncomfortable. He’s a puppy dog, he comes to you when you call him and our goal eventually will be to get him in a paddock with another horse and maybe get him out into a bigger pasture, but we’re going to take that slow. Right now he hangs out all day and grazes and he does get to running around when he sees some activity on the farm somewhere else. He gets to stretching his legs a little bit, and he looks pretty athletic and is no worse for wear when he does that.”

Natalie said, “With a horse like him, it’s pretty much a lifetime commitment and you worry about how they are going to be when they get here. If you get a horse that’s rank or mean, that can be awful to live with, but we had made that commitment. You kind of roll the dice. Hats off to the clinic that had him in California because he came here in wonderful shape and has the greatest personality you could ever wish for. He has a wonderful attitude, with everything he’s been through.”

Two different horses, but the same kind of commendable devotion from Richard and Natalie Alker.

West Point Thoroughbreds has a dedicated Congie Black and Gold Fund that goes toward re-homing, re-training, shipping, and daily care and maintenance for West Point horses no longer competing on the track. All donations are tax-deductible. WPT also allocates resources to monitor horses lost by sale or claim, ensuring their safe retirement to the fullest extent possible. 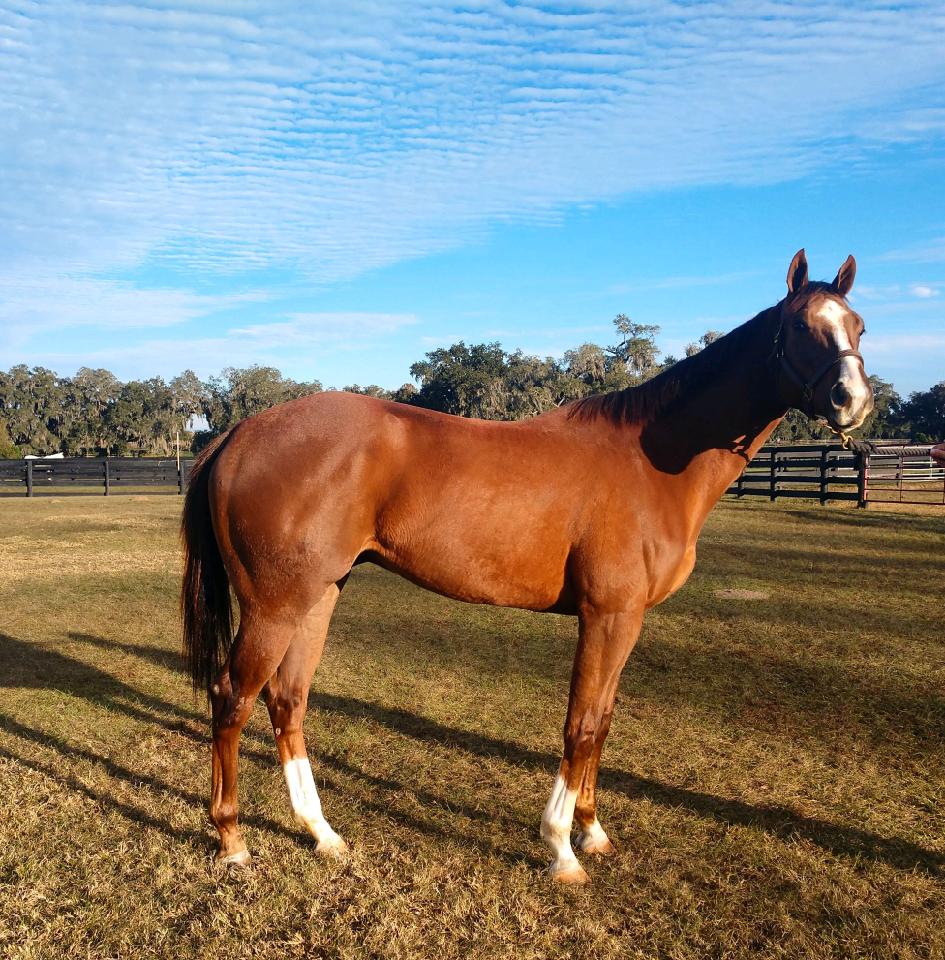 Tomorrow Knows at the Alkers’ Crown Thoroughbreds farm in Ocala. 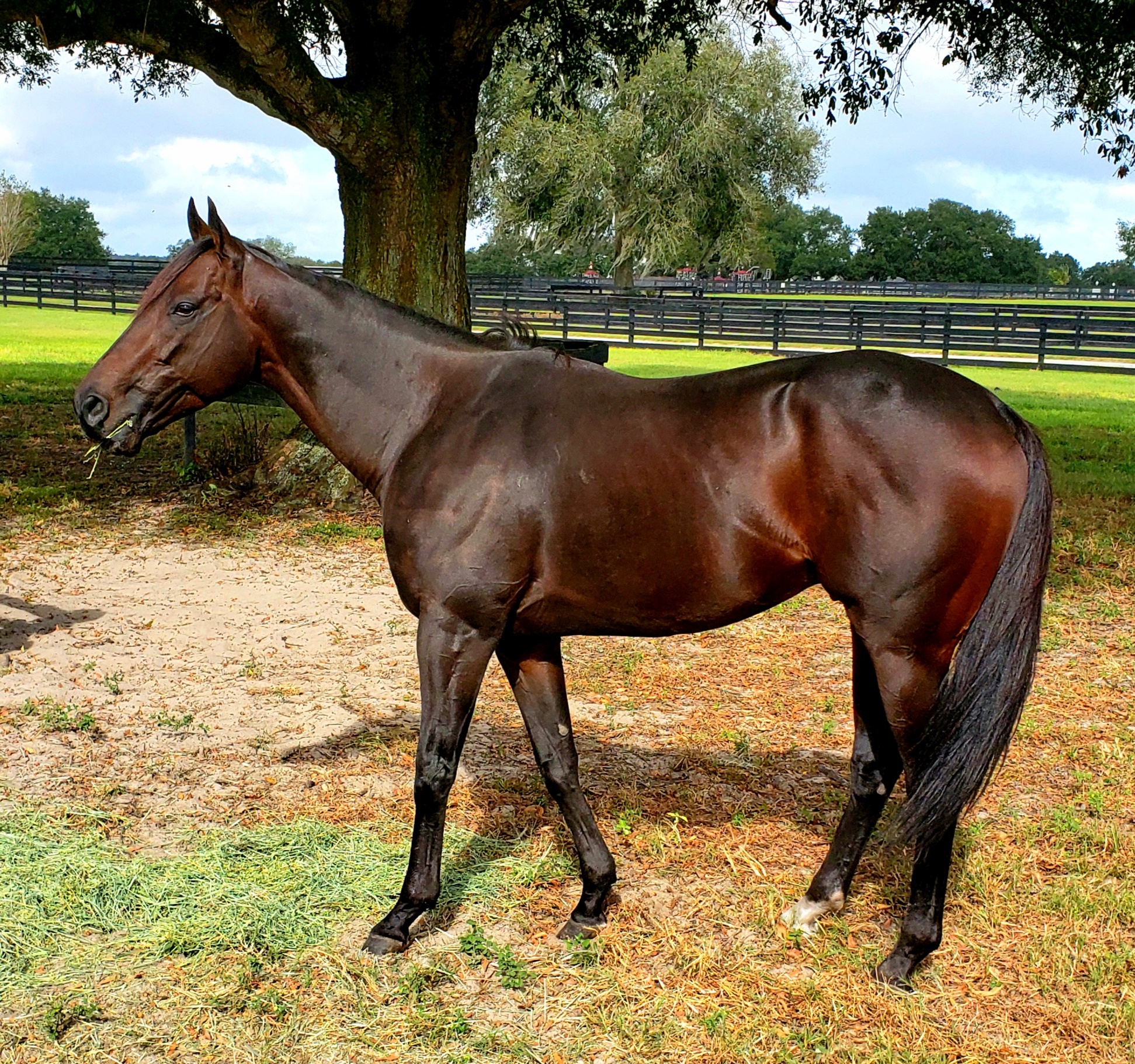 Seven Trumpets in Ocala at the Alkers’ farm.