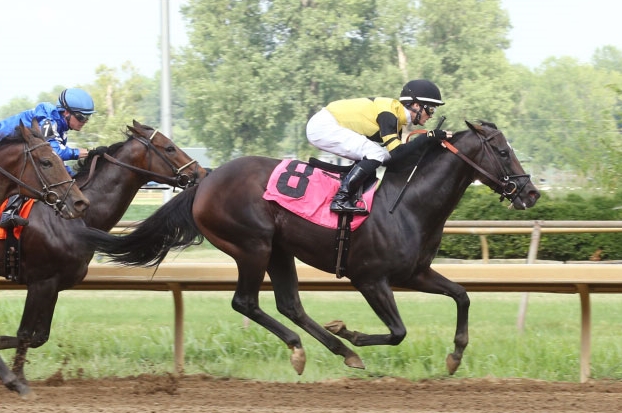 As searing temperatures rolled through the racing landscape in the U.S. this past weekend, a heat weave continued for West Point Thoroughbreds’ Kentucky-based roster.

At Ellis Park in western Kentucky, Seven Trumpets scorched through his first start of the year to win Sunday’s Good Lord Stakes, returning triumphantly after flirting with top-level success as a 3-year-old, including a second-place finish in a Grade 1 race at Saratoga.

Fresh and talented, Seven Trumpets presents an exciting array of options for the second half of the year. West Point purchased him in 2017 at the OBS April sale of two-year-olds in training.

“I’m just so happy to see him back and running happy,” trainer Dale Romans said. “Channing called me from the jocks room and said he got a tiny bit tired but won on class today. I’m excited for his partners. I love winning for West Point, it is always a party atmosphere.“

Seven Trumpets originally was ticketed for the Iowa Sprint Handicap at Prairie Meadows a couple weeks earlier but missed the trip when he spiked a temperature. Once he recovered, Romans and West Point chose to enter him in the Good Lord as well as a Saratoga allowance so they could size up both fields and see how the weather played out in the Northeast and Midwest. They ultimately decided on the shorter van ride and stakes opportunity at Ellis.

Romans also trains the four-year-old filly Coach Rocks, who followed up on a 5-length win at her home track, Churchill Downs, by taking her game to the next level in Saturday’s Molly Pitcher Stakes at Monmouth Park. Coach Rocks gave Midnight Bisou, perhaps the leading dirt female in the country, a run for the money.

After taking command early, Coach Rocks looked like a major threat for the upset until deep in the stretch when Midnight Bisou asserted herself, with Coach Rocks giving way grudgingly and finishing second by more than 5 lengths over the third-place horse.

West Point now has four wins and the Graded stakes placing at Monmouth to show from its last five runners representing the Churchill stables of Romans and trainer Dallas Stewart.