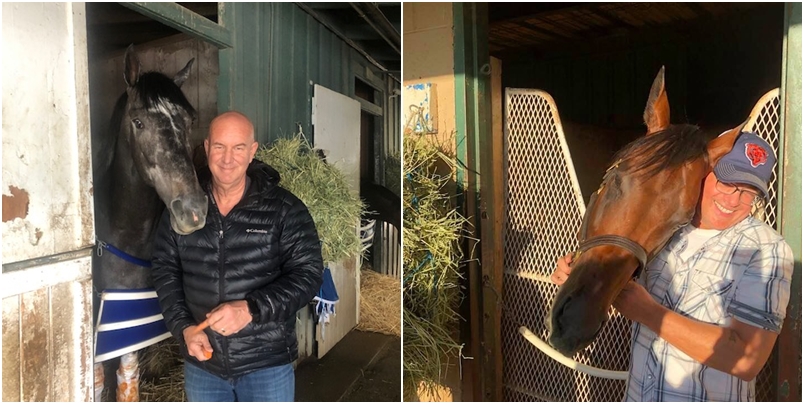 Hall of Fame trainer Jerry Hollendorfer relies on a pair of rock-solid assistants, Don Chatlos Jr. and Dan Ward, in the day-to-day training routine for West Point Thoroughbreds’s Kentucky Derby hopefuls Galilean and Gunmetal Gray. Chatlos traveled with the pair to Oaklawn Park this week for their assignments in separate divisions of the Grade 2 Rebel Stakes on Saturday as they look to bolster their credentials for the First Saturday in May.

Hollendorfer is a man on the move, shuttling back and forth between Northern California, his long-time base, and Southern California, where he has barns at both Santa Anita Park and Los Alamitos. Ward has been a central part of the Southern wing for 12 years now, providing the constant eyes and ears as champions Songbird, Unique Bella, Blind Luck, and Shared Belief have come through the operation and flourished. Chatlos, a Breeders’ Cup-winning trainer himself, joined the Hollendorfer staff four years ago and has been the steady presence at Los Alamitos.

Ward’s background includes 22 years working for another Hall of Famer, Bobby Frankel. When Ward started with Frankel, it was a blue-collar barn, heavy on claiming horses. By the time he left, Frankel had the deepest roster of stakes horses in the country. There is no mistaking that Hollendorfer has been able to bridge a similar gap since Ward joined his staff in 2007.

In between those jobs, Ward stepped away from the racetrack for about a year, working at a sports bar. The lifestyle was more normal—no getting to work at 3 a.m.—but he was soon drawn back to the track and the rush of competition.

“You miss the satisfaction of the competition,” Ward said. “Nothing can replace that. You miss going over there with a horse that you work on every day, and then you bring them over, and they win; there is nothing like that, for the owners, the trainer and the rider, and all the help too. You can’t buy that. Like with Songbird, we would go over to the receiving barn and look at all the other horses, and you would pretty much know what was going to happen.”

Chatlos trained on his own from 1995 to 2008 and came out on top in the Grade 1 Breeders’ Cup Mile with Singletary before stepping back to an assistant’s role, serving under John Sadler and Ron Ellis, before joining the Hollendorfer barn. He looks at this job as like getting the chance to polish his education at an elite school like Harvard.

“It’s the best move that I could make, coming into this situation because now I know what it takes to win 7,500 races,” Chatlos said of Hollendorfer’s stratospheric career total. “It doesn’t happen by accident. He never takes his foot off the gas pedal. It’s very impressive seeing him at 72 years old fly around the country and work the hours he does. From March to May, he’s restocking us with two-year-olds at the sales and then in the fall he’s doing it again at the yearling sales. You can’t just stand pat with the horses you have in the barn because eventually, they are going to move on. I look at his itinerary sometimes, and I’m worn out just from reading it.”

Drive, communication, attention to detail and routine are key ingredients no matter where the boss is on any particular day, which, for the assistants and Hollendorfer, usually begins at around 3 a.m. Within about an hour, they watch all the horses jog, to identify any issues. If Hollendorfer is somewhere else, Ward and Chatlos talk to him on the phone bright and early to decide on game plans.

“Basically, the barn runs the same whether he is here or not,” Ward said. “I call him up when he is at Golden Gate and go over every horse one by one, and if there is something we don’t like, I will say, ‘Let’s not work this horse today and wait.’ That gives you a better chance to avoid injuries. They are gonna happen but if you see a little pressure in an ankle or maybe a foot is hot, you can just wait until the horse is right. When the condition books come out, we go over the horses one by one and figure out which horse should go in which race and then you go on to jockeys and work up a plan. The final decision with the big stakes horses is with him and the owners but we go over all the options and try to be nominated to all the possible races so we can pick the right one.”

Ward has overseen the day-to-day development of Gunmetal Gray, who has been based at Santa Anita all along and was Grade 1-placed in the American Pharoah Stakes there last fall before breaking through for a Grade 3 win in the Sham Stakes over the winter. Gunmetal Gray will get a rematch with American Pharoah winner Game Winner in Saturday’s second division of the Rebel.

Galilean, the sale-topping colt in the 2018 Barretts spring sale, spent most of the second half of 2018 with Chatlos at Los Alamitos and made a strong first impression that he has backed up with three stakes wins in four career starts, all within the California-bred ranks. The lone loss was a second-place finish by a neck on November 3 in his second outing. Now he will be taking on open company and Graded stakes competition for the first time in the first division of the Rebel, taking on the Bob Baffert-trained Improbable.

“Ever since Galilean came in to us, there was no doubt what kind of horse he was,” Chatlos said. “He had that presence about him. You could see he was the man. He had received a break after the sale and you could tell he had had a break, but he was the type you only had to show how to do something one time. He is very smart.

“We got to a point where he was picking up everything so fast so Jerry and I sat down and thought about whether we should go for the Barretts sale stakes race in his debut or do we go for a maiden race. My thought was ‘It would be a shame to see him go in a maiden race and win by 10 when the sales stakes had a $100,000 purse right off the bat,’ and that’s what we did. We started gearing him up for that and with all these races in mind, going through the Cal-bred ranks, to get to where we are now. Obviously, the first time you never know for sure what is going to happen, and he was green, but when a horse came to him late, he dug in and fought him off, so we knew that he had heart on top of the talent. The next race at Santa Anita he had the rail, and we hooked some cheap speed and a Baffert horse comes and gets us by a neck, but it’s 16 lengths back to third, so you are still encouraged. He didn’t give it up,. He didn’t let the horse by him.

Chatlos added: “He was even better training for a longer race than he was for the short races, and he put on a show in his [third] race. It was impressive because a horse came to him at the top of the stretch and he just ran away from him. It was just another race in the progression. Jerry figured after that the [California Cup Derby] would be the race where we would experiment and make him sit back. That is the huge benefit of having all those Cal-bred races, where he can learn and develop before having to take on a horse like Game Winner. Watching him sit third in that race, so relaxed, it was a beautiful thing because you’re thinking about the next one and the one after that and now he doesn’t need to be in front and need it to go his way. It was very impressive in the last eighth of a mile that with no asking, he was just running off and doing it all on his own. He is ready for this step up.” 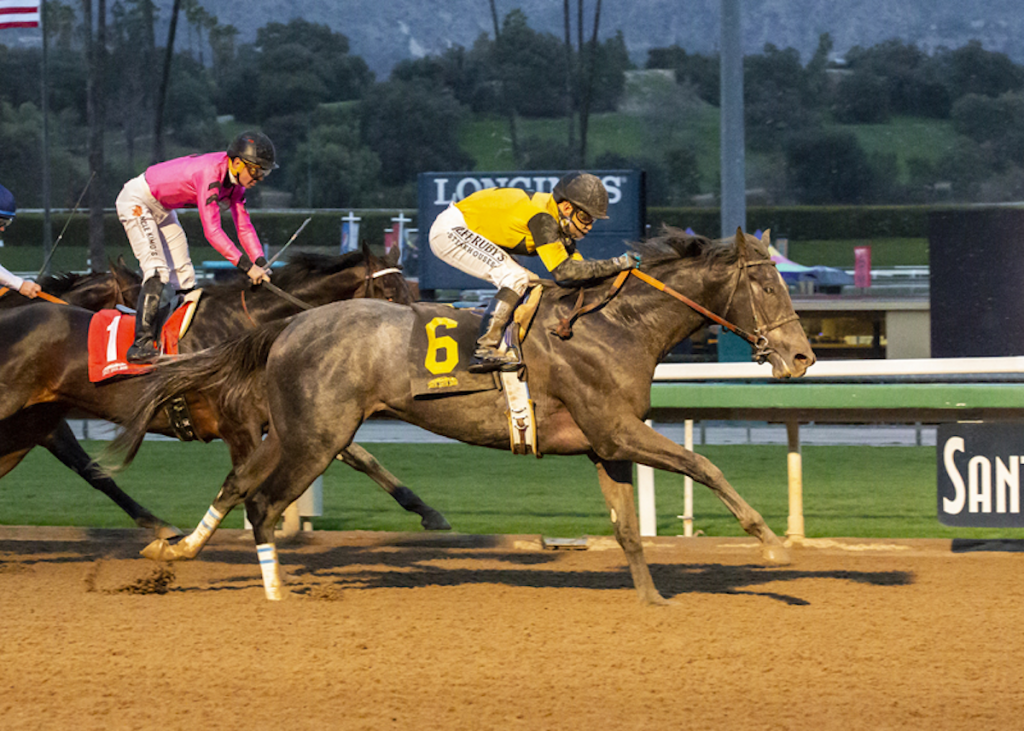