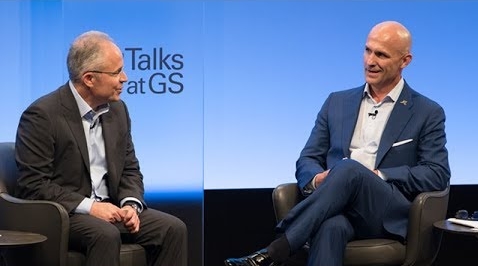 Terry Finley, the founder and president of West Point Thoroughbreds, delved into the virtues and challenges of the horse racing business and his personal experience leading a successful company that forms racing partnerships, speaking on April 23 in the GS Talks interview series at Goldman Sachs in Manhattan.

Finley was interviewed by Jim Conti, a Goldman Sachs managing director and West Point Thoroughbreds Partner. Finley explained the partnerships makeup of West Point’s business model, how the company has grown dating back to his original purchase of a claiming horse in 1991 that he put on a credit card, all the way to reaching the zenith in American racing by winning the Kentucky Derby in 2017, and gave his thoughts on the critical horse safety issue that has enveloped the sport this winter and spring.

A 16-minute video of the interview is here.

“We buy about 40 horses a year, and every horse that we buy we put into an individual syndicate,” Finley said. “So if a person invests, they’re investing into a specific horse that they see the pedigree and they know the trainer and they know the circuit that the horse is on. And you share the upside and the downside and the revenue and expenses, and so it’s just like a NetJets. Off the top of my head, probably about 60 percent of the horses that are running are owned in some sort of partnership. … And so for the investor … what a partnership offers you is the ability to get involved at a very high level and to have access and exposure to the whole world of the racing business, the social side, going to the Derby, getting all dressed up, to the Belmont Stakes. [With] the training and the breeding and the handicapping data, it’s a fascinating world that I know when people get exposed to it, people that get into it really get into it.”

That fascinating world is in a difficult position stemming from horse deaths at Santa Anita Park in California, prompting scrutiny that Finley addressed: “It’s tragic, and we are all heartbroken, but so what do we do about it? That is really the challenge now. We have implemented some changes nationwide, changed some rules. The one significant part of this is a bill before Congress, the Horseracing Integrity Act, which would take away the drug testing and rulemaking out of the commissions. There are 38 different states that actually conduct racing, and so 38 different fiefdoms, if you will. It is a bizarre and out-dated model. The bill would authorize USADA to come in and to own our anti-doping and the human intelligence of our business. People want a fair shot when they put their money in through the window or they own horses. All they really want is for the playing field to be level. I think it is the vast majority of the time, but anytime there is a lot of money, there is going to be cheating.

With the Kentucky Derby approaching on May 4, Finley looked back on the seminal day two years ago when Always Dreaming scored in the Run for the Roses for West Point Thoroughbreds and partners and, comically, one lament that crossed his mind as the colt surged toward the wire.

West Point also finished second in the 2014 Kentucky Derby with Commanding Curve and fifth last year with My Boy Jack.