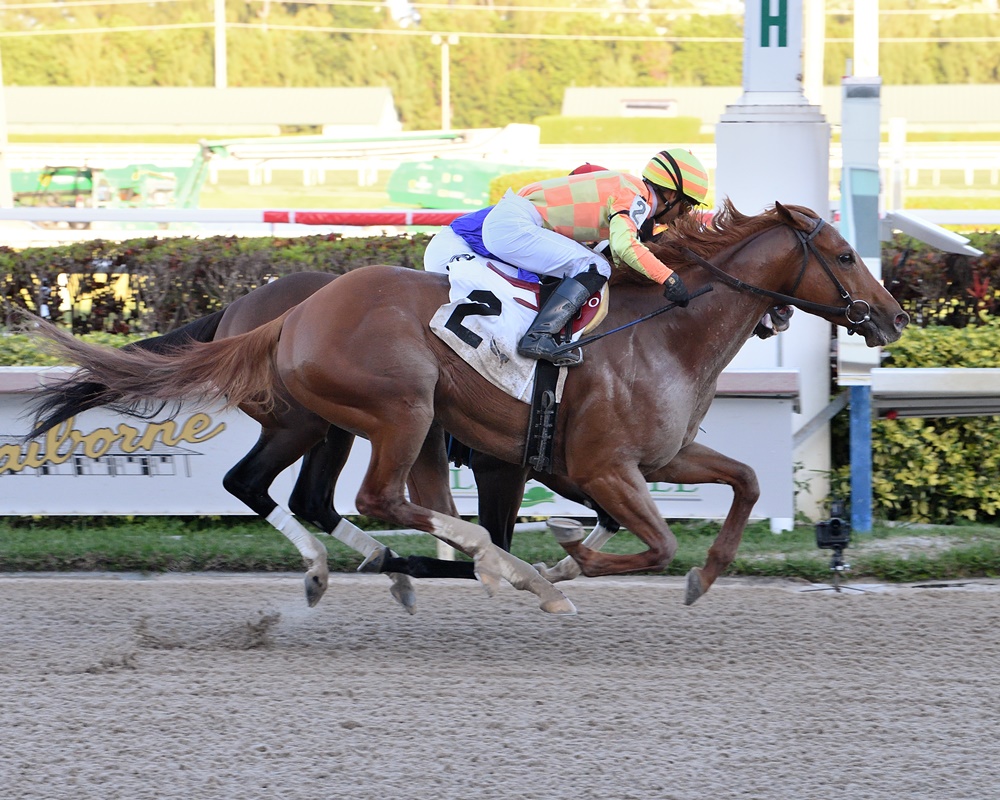 First Captain winning a Feb. 27 allowance that filled on the third attempt.

Your horse has a race date but then, nothing happens. No entry notification, and then word comes that the race has been pushed back, that it “didn’t go.”

What’s going on here, and what happens next?

Stakes races are a planner’s dream in racing. Unless weather or something unusual comes into play, the date is firm. We can count on the Travers Stakes (G1) being run on the last Saturday of August at Saratoga, year in and year out.

As Tom Bellhouse says with a chuckle, “I knew every year at Christmas time which races Twilight Eclipse (West Point’s retired grade one winner) would run in. Just circle the Mac Diarmida and McKnight at Gulfstream, the Man o’War at Belmont, the Sword Dancer at Saratoga, and the Breeders’ Cup! A horse owner’s dream!”

Dates for the bread and butter races like an allowance, maiden special weight or anything with a claiming designation are subject to change. Everything revolves around how many horses are entered for a particular race.

The process begins with the condition book, which is essentially a menu of races that the track’s racing secretary puts together, usually for a period of two or three weeks. A racing secretary worth his or her salt will have a good grasp of the horse population at that racetrack and the extended area in what race conditions are popular, both in the short term over a period of weeks and months and the long-term, especially at a place like Saratoga where there is a year-to-year steadiness to the racing schedule.

Even before the condition book for Saratoga comes out, we can often look back at the previous year (we have a program that allows us to run reports and splice and dice data on races nationwide) and see when a particular race condition was offered and know that there is a pretty good chance that we’ll see the same race again and in just about the same spot on the calendar. And Saratoga being Saratoga, once that condition book does come out, there also is a pretty good chance that the race will fill and be used on the listed date.

But, of course, not every place is Saratoga. Other venues, for instance Aqueduct in the very same circuit in New York, may have a harder time filling races since there isn’t the same horse population in the winter as there is in the summertime. And that is where the race dates can become tentative.

And when a race doesn’t fill, what happens next? Hopefully it was a close call—the race drew 5, 6, maybe even 7 horses, but the track had other races to choose from with more horses and more appeal for bettors.

Our race that didn’t fill will be pushed back and, in a near-miss like this, listed as an “extra” on the overnight. The overnight is a one or two-page sheet with the entries for each card, listing each horse alongside his or her weight assignment, jockey and trainer. At the bottom of the overnight are the “extra” races for the next card to be drawn.

Sometimes an “extra” will fill on the second attempt. Sometimes it will take longer, and the race will appear on the overnight several times before the track cobbles together enough horses for the race to “go.”

Just recently, First Captain had an assignment for a third-level allowance race at Gulfstream that Shug McGaughey figured would be an ideal starting point for his season. It was in the condition book for a Friday, but Gulfstream only got five horses in the first attempt and brought the race back twice before carding it for that Sunday with a field of seven that scratched down to six. First Captain got up in the final jump for a dramatic victory. Other than the temporary uncertainty, waiting to see if the race would fill, it was a plan that came together perfectly.

But sometimes a race plan will go sideways. Say on that first attempt, our horse was one of only a few horses entered, or even the only entry. In all likelihood, that race will be dropped right away and not even brought back as an extra. Our trainer will have to go back to the drawing board, whether that is waiting for several weeks or looking in a different direction, be that a different condition, distance or another locale.

And another topic related to this…sometimes your trainer may be pointing to a race and then not enter at the last minute. Horses are living, breathing creatures who can change day by day. Maybe the horse didn’t lick their feed tub clean like they usually do on the morning of entries, maybe another condition book came out and there is a better spot, or maybe the trainer just didn’t have a good gut feeling. Training horses is just as much of an art as it is a science.

We encourage all of our Partners to be excited when their horse has a race date, but always always remain flexible. When you have a horse sitting on go, no one wants to be waiting. We all love action, but sometimes you have no choice but to wait for it.