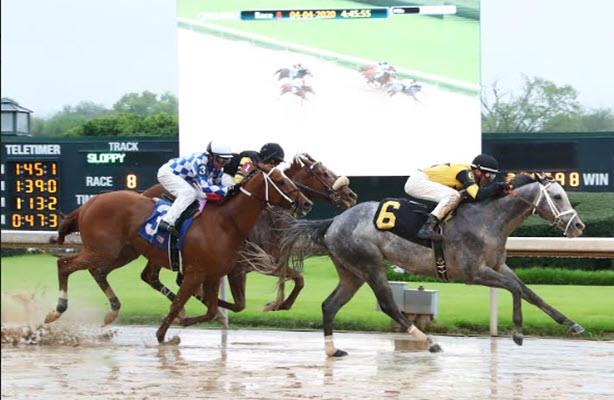 Winning Impression splashes home in front on April 4, only to be disqualified for interference.

The gray gelding is 15-to-1 on the morning line in a field that has been reduced to nine with two scratches. Julien Leparoux has the mount for trainer Dallas Stewart, who finally found a stakes opportunity for Winning Impression. Dallas wanted to run in the Louisiana Derby in late March but the race overfilled and Winning Impression got shut out for an entry. Dallas would have opted for the Oaklawn Stakes on April 11, but an allowance came up a week earlier and with no certainty at that point that racing would continue uninterrupted at Oaklawn, he went for the earlier spot. Winning Impression responded with a career-best performance, pulling away in the stretch to finish first by more than a length, but the stewards ruled that he caused interference and disqualified him.

On Saturday, Winning Impression will reunite with Leparoux, who was aboard for Winning Impression’s third-place finish at Fair Grounds on February 15. Julien also has a memorable history with these connections from this time of year. In 2008, Julien rode Macho Again to a breakthrough stakes win in the Derby Trial at Churchill Downs, followed by a second-place finish in the Preakness Stakes at 38-to-1 odds.

Springtime and improving three-year-olds have been a special combination for the Dallas Stewart barn through the years, often with eye-popping results for the wagering public.

West Point won the Kentucky Derby with the favorite, Always Dreaming, three years ago but also got in on Dallas’ longshot magic in the Run for the Roses in 2014 with Commanding Curve, who finished second at 37-1.

Among Commanding Curve’s partners was Craig Accardo. Now Craig is back on the trail with Winning Impression.

“I sure wish we were in Louisville this week, but we’ll just look forward to the First Saturday in September,” Craig said. “Hopefully this horse will take us there.”

The Arkansas Derby will be run in two divisions, with Winning Impression taking on the 2-for-2 Charlatan representing trainer Bob Baffert in the first division at 5:29 p.m. Central. The race will air on NBC Sports Network, FS1 and TVG.

Can Dallas Stewart Work His 3-Year-Old Magic With Winning Impression?

*For West Point Thoroughbreds, which has had at least one horse with Dallas Stewart since shortly after he opened his own stable in 1997.