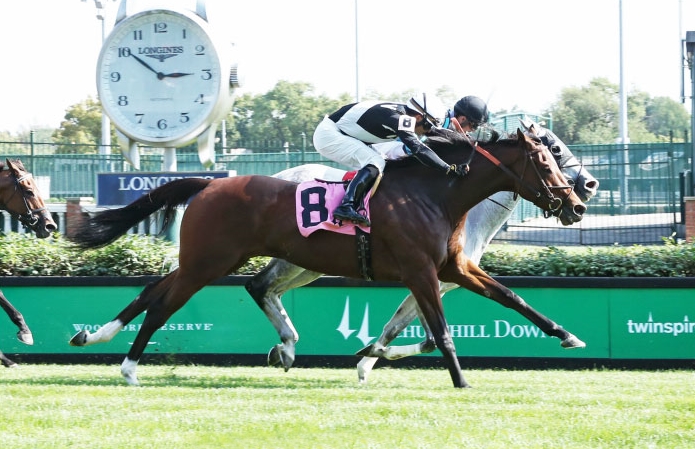 Coach Rocks made a successful switch to turf with an exciting victory in a $95,000 allowance at Churchill Downs on Friday, getting her nose up on the wire with a determined stretch drive under jockey David Cohen.

A Grade 2 winner on dirt, Coach Rocks had placed a couple times on the grass as a two-year-old for trainer Dale Romans and he kept that avenue in the back of his mind to revisit later in her career.

Coach Rocks showed her versatility and tenacity in the mile event on the Churchill turf, making a couple runs at stubborn pacesetter Daddy’s Boo. Coach Rocks tracked in second and made a move from two-wide at the top of the stretch to reach even terms for the lead. Daddy’s Boo seemed to give her the slip going past the eighth pole but Coach Rocks responded again for Cohen and was right on time to get up for the victory.

Coach Rocks did indeed, matching her best Beyer (91) and Ragozin (8) speed figures. She will be considered for a stakes assignment next time.

The victory was West Point’s third in the September meet at Churchill, good enough for third place in the owner standings. West Point also ranked third by wins in the Churchill spring meet.