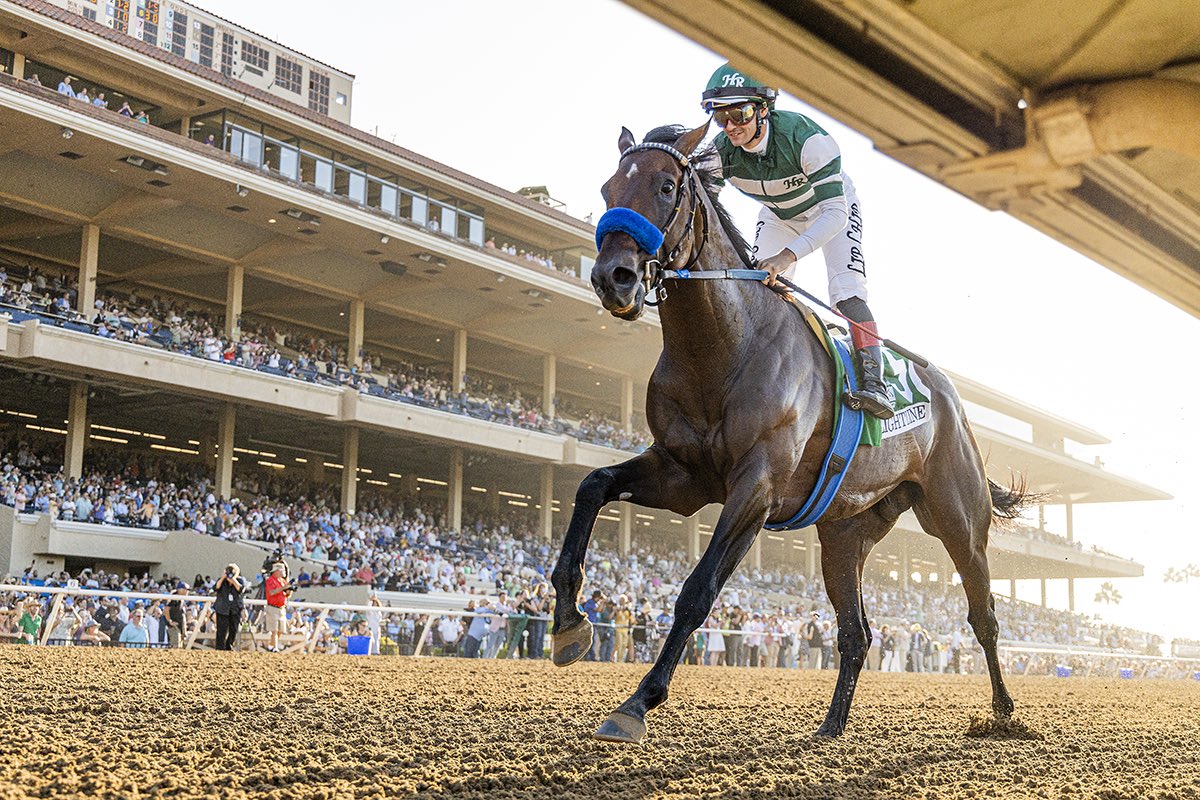 Oh what a feeling—Flightline has outdone himself again, flying to an incredible victory in the $1-million Pacific Classic (G1) on Saturday at Del Mar.

The official margin was 19 1/4 lengths over runner-up Country Grammer, who captured the $12-million Dubai World Cup earlier this year.

Now 5-for-5 lifetime by a combined margin of 62 3/4 lengths, Flightline emphatically conquered his first race beyond a mile and around two turns, scorching 10 furlongs in 1:59.28, .17 seconds off the track record. His 126 Beyer speed figure is the fastest run in North America since 2004 and tied for the second-fastest since Beyer speed figures began being published in 1992.

His negative 2 Ragozin figure also puts him in extremely rare company historically and is the first negative Ragozin figure by any horse since early 2020. By comparison, a negative 2 is more than 8 points faster than the 6 1/2 that Olympiad garnered for winning the Jockey Club Gold Cup on Saturday at Saratoga.

Thoro-Graph credited Flightline with a negative 8 1/2 speed figure, the best in the history of the Thoro-Graph Sheets, dating back to 1982.

Timeform pegged Flightline with a 143 master rating, the highest for an American horse since Timeform began issuing ratings for the U.S. in the early 1990s. The previous best was a 138 for Hall of Fame legend Cigar in 1996.

Legendary track announcer Trevor Denman said it best as Flightline soared through the stretch all by himself: “Flavien Prat just shakes the reins at Flightline and take a good look because you’re not going to see this too often, maybe never again!”

Flavien said, “When we went into the final turn, he was traveling so well I asked him to pick it up a little bit. As soon as I looked back and saw how far in front he was, I wrapped up on him. Obviously, this is the best horse I ever rode.”

Winning the Pacific Classic for the fourth time in five years, John Sadler said, “The distance was the question today and he answered the question.

“Did I think he could do that – win like that? Kinda yeah. You don’t want to say it in front of the race, but now that he’s done it. The thing about him is that he’s fast and he can carry it. Some horses are fast, but they can’t go on. This horse can. He’s an exceptional horse.”

On the strength of that performance, Flightline closed as the 4/5 favorite in future pool wagering for the $6-million Breeders’ Cup Classic (G1) on November 5 at Keeneland. The colt will return to Santa Anita next week and train up to the Breeders’ Cup.

John said, “He came out of the race exceptionally well. He went back to the track Wednesday and will have an easy week here this week and get back to Santa Anita next week and then we will start getting him ready for the Breeders’ Cup.”