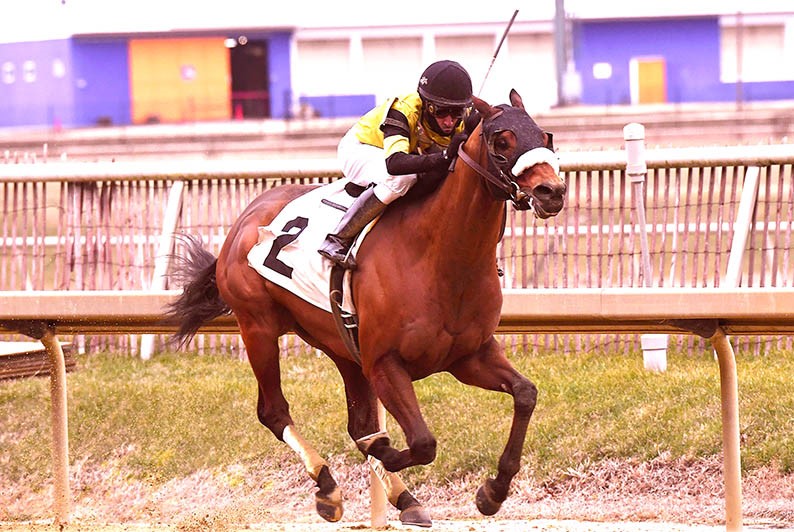 On his first attempt at stakes competition, 6-year-old Mineshaft gelding General Downs once again showed his affinity for Laurel Park, charging home to win the $100,000 Native Dancer Stakes by three-quarters of a length. It was his second straight victory at Laurel. He prevailed in a second level allowance race back on December 22. The Kelly Rubley trainee has an impressive record of 9-2-4-1 since being moved to the Mid-Atlantic circuit.

General Downs broke sharply in the two-turn event and found himself fairly close early in the contest. He settled perfectly down the backstretch for jockey Julian Pimentel who patiently piloted the horse and enjoyed a very good trip. When it appeared some of the speed was backing up, Pimentel guided General Downs to the outside, and the horse took off under a hand ride turning for home. He quickly seized command and kept to business with the increasingly familiar white shadow roll of KMR Racing Stable crossing the wire in front of the fast closing 13-time winner Rich Daddy. He completed the about one mile and one-sixteenth distance in 1:42.92 on a fast track.

When asked by Stan Salter in the post-race interview what’s been the magic touch with General Downs, trainer Kelly Rubley replied since coming to her after a well-deserved break, “…he’s truly never put a step wrong.” She went on to talk about the benefits of being stabled nearby at Fair Hill. “You know this is an older horse who’s been in the business a while, and he loves his turnout…he’s turned out every day when weather permits…and it’s made him a happy horse.”

Jockey Julian Pimentel said of General Downs, “He’s a really nice horse. I had a good trip. I sat behind the speed, and when it was time to go, he did.”

West Point Thoroughbreds chief marketing officer Dawn Lenert was at the Maryland oval with some Partners for the race, and all were beyond excited for the big win. “Kelly has done a great job figuring out this horse,” Lenert said. “She’s pretty attuned to his attitude and behavior. This stake came up pretty quick after a strong performance last time out, so I was slightly concerned about running back on short rest. Kelly assured our team that the horse was feeling spectacular and showing her all the signs that he would put in a good effort, so we decided to take a shot. Plus Julian gave us some great feedback after his last race that he thought General Downs prefers to be hand ridden. If you look at the Native Dancer replay, you’ll notice he didn’t tap him with the stick more than twice.”

West Point Thoroughbreds president Terry Finley gave Rubley high marks on Capitol OTB’s “Racing Across America” show the Saturday morning of the Native Dancer, saying “We gave this horse to Kelly Rubley about nine months ago and she’s done a really, really nice job. She’s got a great future in this business.” 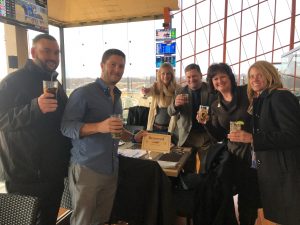 Before his Partners finished celebrating in the new luxury dining box seats at Laurel, General Downs was on the van back to his home. By stepping up and passing this test, the gelding showed that he can consistently compete with the salty, more experienced dirt distance horses in the twilight of his career. As one of his Partners, John, said after the race, “All I have to say is WOW! When I first joined WPT four years ago, I was hoping to achieve three things: a win photo, a win at Saratoga and a stakes win. The General broke his maiden second asking at Saratoga and rolled a few hours ago to a stakes win. I’m proud to be involved in this partnership.” Here’s hoping General Downs can add a few more “big” photos to John’s wall.