Originator returned from vacation to jump-start the summer festivities for West Point Thoroughbreds at Saratoga Race Course, rallying to victory in a $92,000 grass sprint on Saturday afternoon. 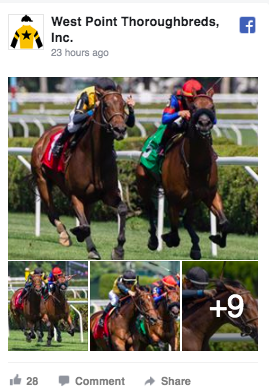 The 4-year-old filly scored almost a year to the day since her second-place finish at Saratoga last July in the Coronation Cup Stakes over the same 5 1/2-furlong configuration. Trainer Ian Wilkes gave the daughter of Breeders’ Cup Mile winner Artie Schiller the fall and winter off before revving her back up with the elite summer meet at Saratoga in mind.

This was a family affair as Wilkes’s son-in-law, jockey Chris Landeros, guided Originator to the victory, his first with retired jockey Richard Migliore serving as his agent. Migliore is the father of West Point’s Joe Migliore.

Originator sat back along the rail from a few lengths off the pace and found a seam in the stretch to make her move, shooting to the front to win by a half-length at 9-to-5 odds as part of a coupled entry.

“It got a little tight there for a second,” Landeros said. “She was very game to get through there.“