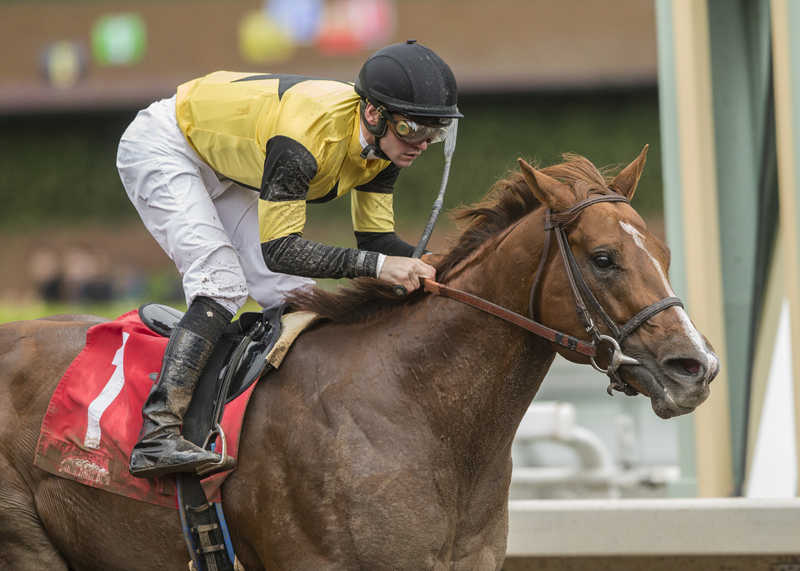 Kanthaka proved he is one of the top 3-year-olds competing around one turn with a score in the $100,000 Laz Barrera Stakes (G3) at Santa Anita. The son of Jimmy Creed is undefeated at the seven-furlong distance and is a top contender for the $400,000 Woody Stephens Stakes (G2) run on Belmont Stakes day, Saturday, June 9 at Belmont.

Winning trainer Jerry Hollendorfer: “I thought Flavien put the horse right up in there where he had a chance to get trapped and not get out, but he was counting on getting a seam and he did get the seam, and went through it right away. I think he has the potential to run longer distances, but there are seven-furlong races that fit him really good.”

Winning jockey Flavien Prat: “I waited to make my move when I wanted, and it opened up perfectly. After that, he did a brilliant job. Once he got the lead, he kind of looked around. We made that nice move, and for about half a length, he looked around, but that was it.”

Partner Michael Grimm, who was interviewed in the winner’s circle: “It’s very exciting. This is our second graded stakes win with Kanthaka. We love the horse; he tries so hard. You can always find the breeding for a horse, but you don’t know what’s inside of him until he actually gets into a race. He’s shown he’s got big courage. I was worried when horses came up to him in the stretch, but he held them off and showed his courage.”

Kanthaka Partners Trevor and Karen celebrating his win from Alaska: 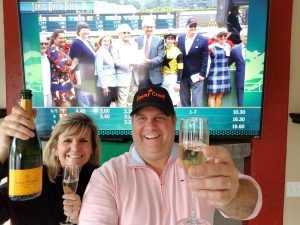 After Kanthaka got the job done on the West Coast, West Point Thoroughbreds’, Robert Masiello’s, and Chris Larsen’s Berned won the Serena’s Song Stakes on the Jersey Shore. The daughter of Bernardini is now 2 for 2 at Monmouth Park.

Under “Jersey” Joe Bravo, she sat off the pace early, split horses with an explosive move on the far turn, and drew clear with her ears pricked.

Trained by Graham Motion, this is the second stakes win of the filly’s career. She captured the Safely Kept Stakes at Laurel in November.

“I had a good trip, but credit to this filly,” Bravo said. “This race makes you expect a really good summer out of her. I really have to thank the filly for this win. She was just push-button.”

“She’s a bit inconsistent, but I felt good going into the race because she’d done so well the past few weeks,” said Motion. “Physically the filly looks as good as ever. We cut her back to seven-eighths last year, and she won the stake at Laurel, but I felt like this was a really good spot for her especially since she’d already won here. 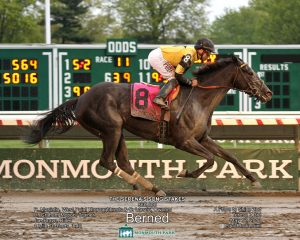