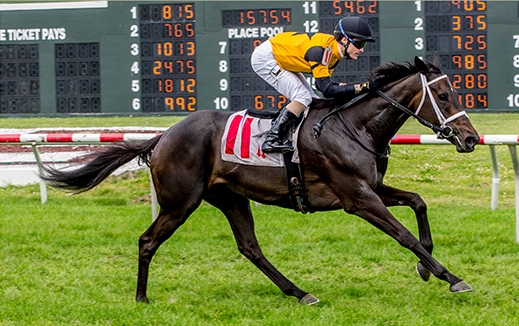 Room To Finish added to her ultra-consistent record with an easy victory at even-money odds on Sunday in a turf allowance at Fair Grounds.

The Louisiana-bred four-year-old filly notched her second victory and has never been worse than second in six lifetime starts.

West Point partner Gary Friederich and his family made the trip from Chicago to attend the race and were rewarded with a visit to the winner’s circle with their filly.

West Point Thoroughbreds, Forge Ahead Stables and Jerry Caroom purchased Room To Finish privately late last summer after she began her career with a pair of second-place finishes at Del Mar. She joined trainer Wayne Catalano in New Orleans and scored right off the bat in a maiden special weight event on December 6.

Stepping into allowance company, she finished second twice in January, the first coming on dirt and the second on the grass, before this assignment with the outside post in a field of 10.

Forced to go wide around both turns, Room To Finish and Catalano’s son-in-law, jockey Channing Hill, were ready to pounce for the lead going past the eight pole and cruised on to a two-length victory, covering about a mile and sixteenth in 1:46 1/5 on a firm course. She earned $25,200.