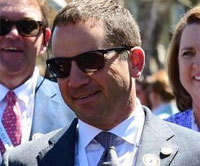 West Point began working with bloodstock agent David Ingordo in early 2017. He’s one of the very best identifiers of young talent in the world.

Born into a racing family, David started working for Hall of Fame trainer Bobby Frankel at age 14 and worked his way up to assistant trainer by 18.

His father, a jockey’s agent, won the Kentucky Derby with his jockey, Patrick Valenzuela, on Sunday Silence in 1989. His mother, Dottie Ingordo-Shirreffs, was the longtime business manager for Bobby Frankel and now the racing manager for Jerry and Ann Moss.

After graduating from the University of Kentucky, David worked at Juddmonte and Walmac Farms in Kentucky before establishing his own bloodstock agency.

In 2005, he selected Zenyatta for owners Jerry and Ann Moss at the Keeneland September Yearling Sale. Purchased for $60,000, the Champion mare won 19 of 20 starts and earned over $7.3 million.